Big Business at Union Pool in 2009 (more by Justina Villanueva) 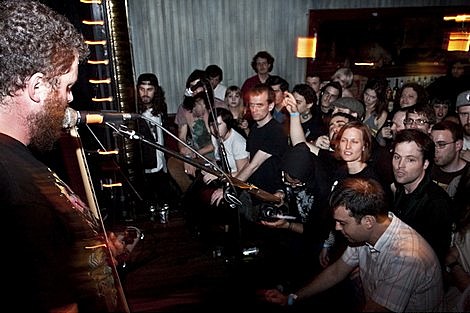 Portland sludge rockers Red Fang are planning to release a new 7" single, "The Meadows," via Scion AV at some point in the near future, and they've also announced a headlining US tour for May/June. The tour will be a triple dose of big stoner riffs with support coming from Austin's comparatively newer American Sharks and the longer-running Seattle sludge unit Big Business. The tour hits NYC on May 27 at Music Hall of Williamsburg. Tickets for that show go on sale Friday (4/4) at noon with an AmEx presale starting today (4/2) at noon. All dates are listed below.

Towards the end of last year, Big Business finally got around to following 2009's Mind the Drift with a new full length, Battlefields Forever, which they quietly released on their own Gold Metal label (which they previously released two singles on), following the demise of longtime label Hydra Head. You can stream that album in its entirety, along with the list of tour dates, below...