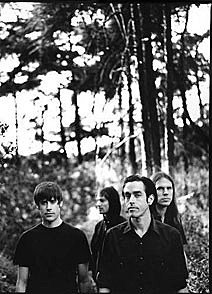 Red Sparowes might be sans Josh Graham (A Storm Of Light, Neurosis, etc), but all that means is leaning harder on members of Isis, The VSS, Halifax Pier, and Angel Hair a little more, which could be ALOT worse.

The band hit the studio with producer and new Big Business member Toshi Kasai in May and will drop the EP Aphorisms digitally on August 1 (Vinyl/CD this fall) via Sargent House. Dig on track uno at their myspace, the concisely titled (Red Sparowes are sooo good at that) "We Left The Apes To Rot, But Find The Fang Still Grows Within".

Red Sparowes will also hit the road this week for a set of mostly UK dates including an intersecting show with an ongoing Harvey Milk/Oxbow tour (dates below for that) and concluding with an appearance at the Wickerpark Fest with Isis, Don Caballero, High On Fire, Okkervil River, Russian Circles and approximately one metric shit-ton of other great bands. Dates below.

Harvey Milk is currently streaming one of my favorite albums so far this year "Life.... The Best Game In Town" here. Melvins are also streaming their entire new album.

Big Business & Melvins will be in town very soon, and have their own ATP to curate.

The VSS recently reissued Nervous Circuits. High On Fire may be playing with Opeth. Tour dates below....