Red Sparowes with touring guitarist Brendan Tobin (Made Out of Babies) 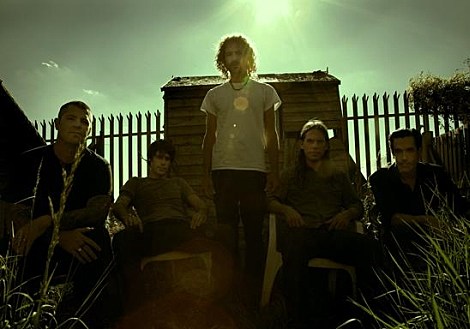 Red Sparowes have announced a new axe-wielder to their ranks, replacing the departed Josh Graham. The band comments:

I think it's safe to announce our new guitar player is Emma Ruth Rundle. She's an unbelievable guitar prodigy. A better guitarist than any of us. And, she works building and repairing guitars. Pretty awesome.

What role Rundle will play on the bands upcoming full-length is not known, but the band have completed seven demos to be recorded in August for release on an upcoming LP due in 2010. Look for some of those tracks to surface while the band plays a few dates "in Oct/Nov" including a date at the Fun Fun Fun Fest with the previously announced Jesus Lizard. More details about FFF Fest and the Red Sparowes tour are forthcoming. The band plans a full US tour, followed by a European tour in spring 2010.

Red Sparowes next release isn't that LP follow up to Every Heart... though, it's the Toshi Kasai co-produced (with the band) Aphorisms DVD+12" which is due this fall. That EP along with the entire Red Sparowes catalog is now available for download as "pay what you want" (over $2.50 that is) from the band. Check that out here.