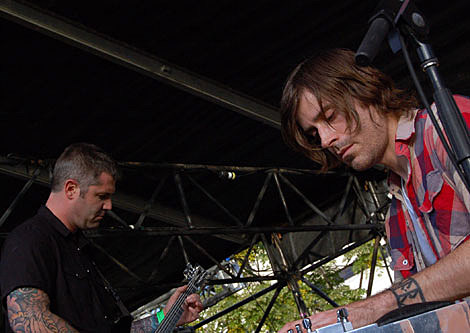 Red Sparowes and Doomriders will team up for a pair of NYC dates at Mercury Lounge on April 13th (tix) and 14th (tix). Tickets go on sale at noon on Friday (2/5).

Red Sparowes will be another species of bird entirely, Mockingbirds, when the band support Imaad Wasif at LA's Spaceland on 2/4. Confused? Let the band explain:

For those of you in the Los Angeles area, we are playing a mostly-improvised set of songs this Thursday night, February 4th at Spaceland under the name Mockingbirds. This is not a set of Red Sparowes songs. There will be no visuals. It's just a chance for us to play around with some musical ideas. We'll have a special guest doing vocals on one song.

Red Sparowes are prepping to release their new LP The Fear is Excruciating, But Therein Lies The Answer via Sargent House on 4/6. Check out a video trailer for that LP below.

Doomriders have a few dates on their calendar as well, including a few with Skeletonwitch. All Doomriders dates are below. Meanwhile Nate Newton of Doomriders' other band, Converge, was recently mentioned in an interesting tweet/twitpic by Coalesce...

If this is a real tour, please someone kindly remove my jaw from the floor... 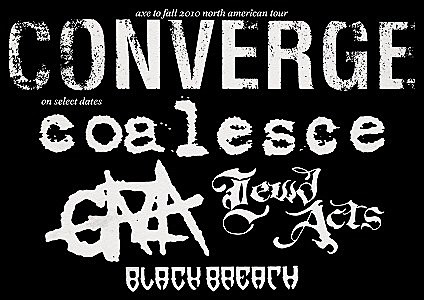 As pictured in the Fun Fun Fun fest pic on top, Brendan Tobin of Made Out of Babies occasionally fills in for Bryant Clifford Meyer (Isis) on guitar in Red Sparowes. MOoB will be at Union Pool with Unsane, United Nations, and Dark Vibe on 2/12 (a BV Presents prodiction). Tickets are still available, but get 'em now, this show WILL sell out.

All dates and that video below...