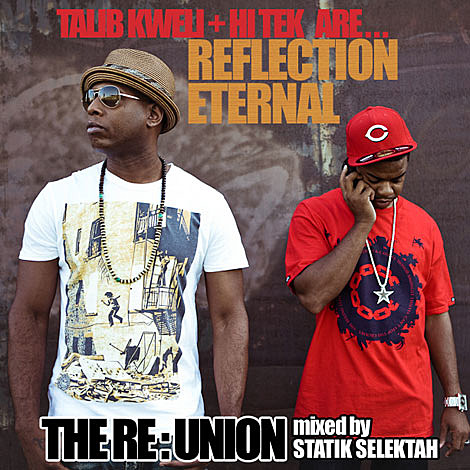 Former Blackstar bandmates and continuing collaborators Talib Kweli and Mos Def are keeping up the busy pace they each set in 2009 with even more tour dates and releases to come in the new year.

After performing a spattering of shows with long-time producer Hi-Tek as a reunited Reflection Eternal last year, the much beloved pair is coming back to the New York area with a late show at Highline Ballroom on Friday, January 22nd (tickets are on sale). This date comes in the support of The Re:Union Mixtape, the fantastic new free compilation of fresh and unreleased Reflection Eternal cuts (with some classic Kweli and Hi-Tek jams throw in as well) mixed, mastered, and co-produced by Statik Selektah. If the new tracks are any indication, Kweli and Hi-Tek are poised to make a splashing return to form on their upcoming full-length LP Revolutions Per Minute, which has a tentative release date of March 2010.

Before that gig, Talib has two more scheduled local appearances. The first is this Sunday, January 17th, when he'll perform at Pyramid for an End Of The Weak party with special guest Webbafied.

The second, and definitely more eye-popping event is Mind Body Soul: A Concert Event To Raise Awareness For Diabetes. Organized by Heavy Sound and taking place at the Knitting Factory in Brooklyn on Wednesday, January 20th, the benefit concert will feature hosts Michael Rapaport, Okayplayer (perhaps ?uestlove), and Phife Dawg, and performances by Kweli, Ghostface Killah, Jay Electronica (whom Talib just collaborated with for killer Re:Union track 'Just Begun'), and Consequence. Tribe Called Quest member Phife, a long-time diabetic, was first diagnosed with the disease back in 1990, and is making his first appearance in the public spotlight after recently receiving a much needed kidney transplant. Other performers are promised as well (an earlier flyer for the event had Blakroc listed, although that has now vanished from the more updated version...let's hope they might be one of the special guests). Email RSVP@heavysounds.com to get in for free before 11:00pm.

Meanwhile, Mos Def will be back to perform tracks from his Grammy-nominated album The Ecstatic this Sunday, January 17th, at The Highline Ballroom. The show is a rescheduled appearance from December 20th of last year, which was canceled due to weather ($45 tickets). Later in the month, the Mighty Mos performs two more times. First it's at the Apollo Theater for IMAN Presents: Special Edition of Community Café, on Saturday, January 23rd. He'll be there along side Daily Show correspondent and comedian Aasif Mandvi as well as other guests ($20 tickets). Then you can catch Mos when he opens for DOOM at Nokia Theatre on January 30th ($40 tickets) 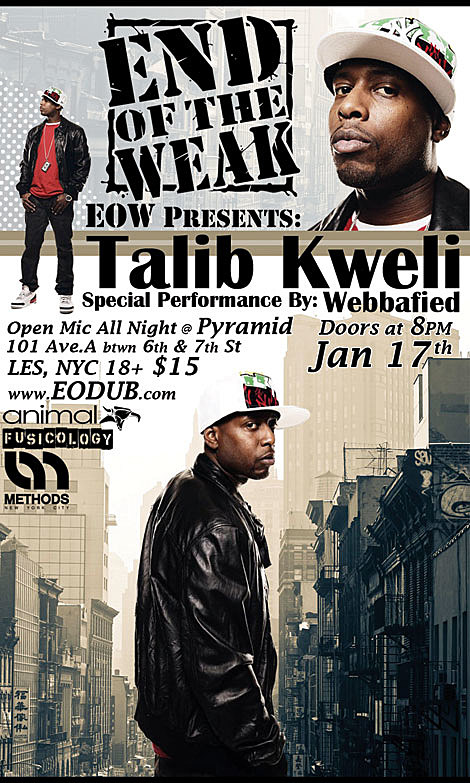