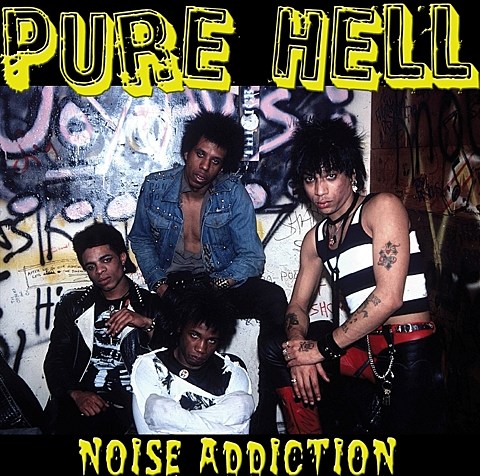 Despite forming 40 years ago and having been cited by Bad Brains as an influence, Philadelphians and "The World's First Original All Black Punk-Rock Band" (or at least one of them) Pure Hell still fly under the radar. Of course, a lot of that is due to bad luck. Their 1978-recorded debut Noise Addiction sat on the shelves for 28 years. Their follow-up The Black Box, which purportedly features back-up vocals from Lemmy of Motörhead, is still sitting there. And that's a shame, since burners like "Future" show that they probably could've carved out quite a legacy if their timing was a little better.

However, like Death, Pure Hell are in the process of rewriting history. They've been gigging steadily this decade, last playing their hometown in April. And on August 9, they'll be heading to NYC to play the Grand Victory with Dead Tricks, Done With You, Sharp Lads, the Afterbirth, and the Quiggs. Tickets will be $12 at the door. Bill mates Done With You and the Sharp Lads both have new records out and the Quiggs have an EP on the way. You can check out songs off of those below.

Stream Pure Hell's Noise Addiction, with the other aforementioned tracks, below...