photo: Refused at Europa in 2012 (more by Fred Pessaro) 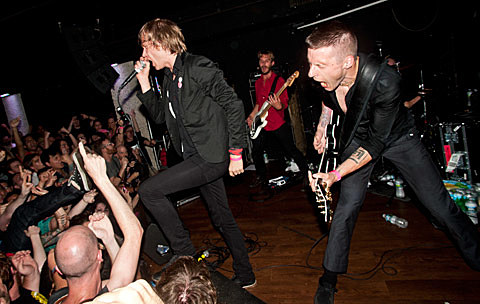 Swedish post-hardcore greats Refused briefly reunited in 2012, said the reunion was over, but then announced festival dates this year and also have hinted at a new album. Now they announced a run of US club dates, including two in NYC.

The tour has them playing 500-ish cap venues, which are much smaller than the last tour's Terminal 5 show and the Williamsburg Park show that was cancelled (but not smaller than the Europa show they played to make up for the cancellation). The tour stops in NYC on June 3 at Bowery Ballroom and June 4 at Music Hall of Williamsburg. Tickets for those shows go on sale Friday (4/3) at noon.