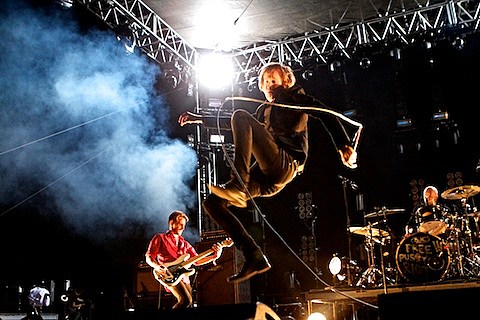 Refused reunited in 2012 and said that was it but now Property of Zack is pointing to an Instagram that seems to confirm they're recording a new album. The caption reads, "in austria tonight for the ahoi pop festival weekend along with st. vincent and this guy's band invsn which he's doing between finishing vocals for the new refused album that's coming out next year."

Meanwhile if Refused are in fact recording a new album, it's presumably without guitarist Jon Brannstrom. Earlier this month, Brannstrom posted to Facebook that he was fired from the band. The rest of the band responded saying:

Any collective effort will have its ups and downs and when people really pour their hearts into something, things get complicated. We cut ties with Jon already in 2013 because he did not share our passion for the band. We don't know why he decided to emit this narrative on facebook or why he did it now, instead of just calling one of us up, but we wish him the best in his future endeavors.

Read Jon's full letter below, and hopefully stay tuned for more on that album...

Jon Brannstrom's letter on being fired from Refused

I was fired from Refused a while ago. I wasn't given a reasonable explanation and wasn't even invited to sit down and talk about it, so I'm not completely sure why they decided to go on without me. We've always been better at punk rock than democratic processes and dealing with conflicts, so I guess I'm not too surprised it went down like this. Quite sad indeed, but perhaps it's all for the best. I have always been more interested in writing music than reproducing it, more at home in the studio than on the road. Comfortable with slow intellectual processes rather than reacting instinctively in tumbling settings. What hurts me the most, is obviously the gesture. We've had our ups and downs, but we've made art together and have been tied to together through Refused for twenty years. I used to be proud to call these people my friends.

Enough rationalization and moaning, though. I'm writing to you through this forum to express my gratitude. If it weren't for you Refused wouldn't have happened in the first place. All of you who made, and still make, wonderful art, thus inspiring us to also try to do so. All the people whose fights fueled ours. Those who couldn't stand oppression, who took action against capitalism, racism and sexism. All of you who through words and activism lit sparks, kept ideas of solidarity alive, who actually made a change. And of course all you beautiful people who came and made our shows. Who gave us feedback on our music through dancing, shouting, late night discussions, through bombarding us with human faeces. You made it happen in the nineties, you made it happen during our reunion a couple of years ago. Touching to say the least. And I know you'll keep it up. Fighting, dancing and creating forever. I know I will. Through my music, through my work, through interactions, through speaking up. Just not through the forum of Refused anymore.

From the very bottom of my heart, thank you. See you in the pit.