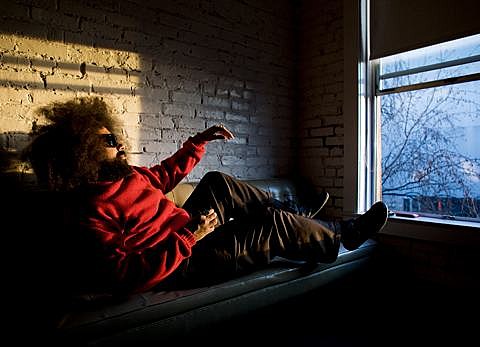 Comedian, actor, and musician Reggie Watts is one of the busiest weirdos tearing up the comedy world right now. As one of the founding members of JASH, he's done social experiments testing if music can get you laid, start a party, get you high, and more. As the bandleader of IFC's Comedy Bang! Bang!, he has provided the soundtrack to one of the best and most interesting phony talk shows on TV.

He is not going on the Comedy Bang! Bang! LIVE! Tour, which comes to New York for two shows at NYU Skirball Center on October 12 (a few tickets still available for the 10:30 show).

But he has just announced that he is headlining Irving Plaza on December 11, in what is apparently his last announced show of this year. (He likes to do unannounced shows, sometimes, though.) It's bound to be bizarre and wonderful, and I highly recommend seeing him live. Tickets go on sale Friday (9/13) at 10 AM with a Citi presale starting Wednesday (9/11) at 10 AM, and Livenation and Music Geeks (password is "musicgeeks") presales starting Thursday (10/12) at noon.

All Comedy Bang! Bang! LIVE! and Reggie Watts solo tour dates are listed, along with a Comedy Bang Bang video with Aziz Ansari, below.