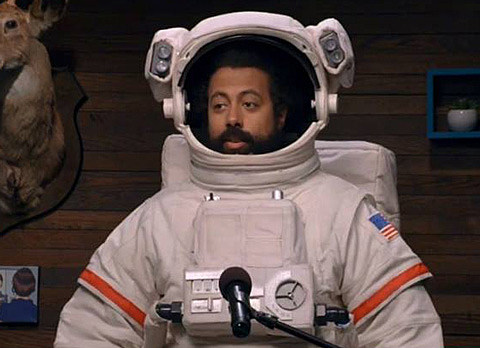 The Late Late Show with James Corden will take over for the departing Craig Ferguson on March 23 and it's been announced that Reggie Watts will be the show's bandleader. It's a role Reggie already knows, as he's been doing it on Scott Aukerman's quasi-talk show Comedy Bang Bang! for three seasons. As for that show, Aukerman says, "Reggie is sticking around thru the first half of 2015, during which he have planned a very fitting goodbye for him." Comedy Bang Bang! wraps up its third season this Friday (12/19) and Season 4 begins January 9 on IFC.

Right before the S4 premiere, Reggie will be appearing on Nat Towsen's Downtown Variety Hour which happens at NYC's UCB East on January 5. Other guests include Janeane Garofalo, Jamie Kilstein and Allison Kilkenny (#NEWSFAIL, Citizen Radio), and "a special Two Boots Pizza Dedication Ceremony." Reservations (tickets $5) will be available soon.

This past Friday's episode of CBB! was an especially good one, featuring guest Eric Andre and a whole lot of time travel. You can watch it online at IFCtv.com.