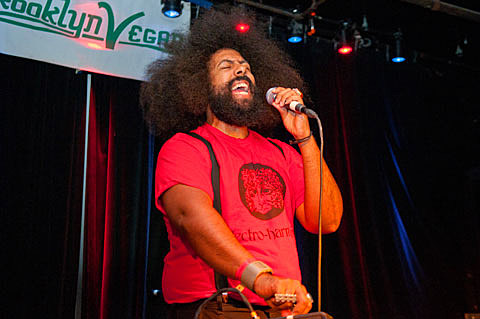 Much like his friend Conan O'Brien did, NYC comedian/musician/mastermind Reggie Watts is heading down to Jack White's Third Man Records to perform and cut a live record. The December 2nd show will be "recorded live directly to analog reel to reel tape and available for purchase to all those in attendance. Only patrons of the event will have the opportunity to purchase a very limited edition Black and Blue split color vinyl of the show they just saw for a cool $20." Hopefully that also gets a wider release.

Catch Reggie in NYC on December 17th when he headlines the sizeable Highline Ballroom. Tickets cost $20, but I'd imagine if he is playing a headlining show at a venue that big for that much money, he has a lot in store.

Check out a video he made of himself talking to Jack White about the upcoming Nashville gig, below...