Reggie Watts at Glasslands in January (more by Alyssa Tanchajja) 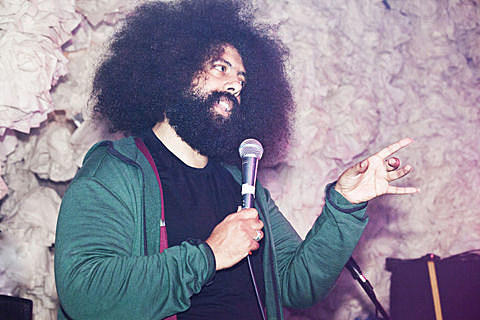 Comedian/musician Reggie Watts has some shows coming up this year including Bonnaroo, and he's got a couple in NYC too. First, he'll play the annual Bushwick Starr spring benefit this Sunday (6/9) (somewhere he's played before) with Maggie Robinson and The Mighty Third Rail. The show starts at 5 PM and Reggie's on at 8. Tickets for that are on sale now.

Later on in the summer, Reggie will play another NYC show at Mercury Lounge on July 11 with Shining Mirrors. Tickets for that show go on sale today (6/7) at noon.

Reggie also has some ongoing video series, including his "Adventures in Bonnaroo" series and "The Social Music Experiment." In the latest installment of the former, Reggie explores Bonnaroo's silent disco, and in the latest installment of the latter, Reggie asks the question, "Can Music Start a Party Anywhere?" Check out both videos, and Reggie's upcoming tour schedule below...