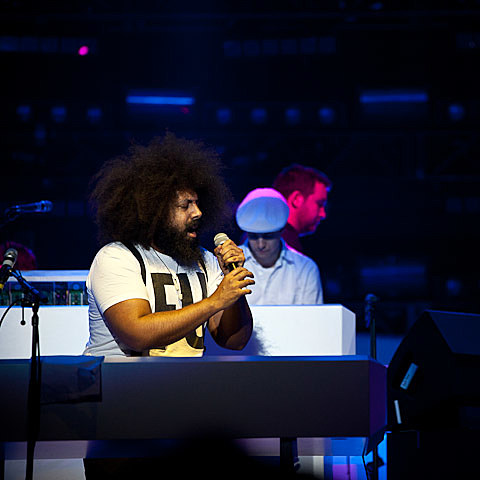 Reggie Watts is more than halfway through a six night run of shows in Melbourne, Australia, but he'll return in time for "Radio Play" which keeps him busy for the bulk of May. Then this summer Watts will play a pair of Summerstage shows in NYC within days of each other. On June 22nd, look for Reggie at Central Park Summerstage with Natasha Leggero and then on June 24th in Red Hook Park with DJ Stormin' Norman. Both shows are FREE and kick off at 7:30PM and 7:00PM respectively.

In other musical comedy news, Dave Hill's band Diamondsnake plays a late show at Mercury Lounge this Saturday night, 4/23. As you may know, Moby is also a member of the hard rockin' band, but he can't make it that night. Instead, Nash Kato of Urge Overkill will take his place on guitar. TAB the Band open. Tickets are still available.

Reggie Watts recently teamed up with David Cope and Bette Bentley for a pair of digital shorts, both of which are viewable below.