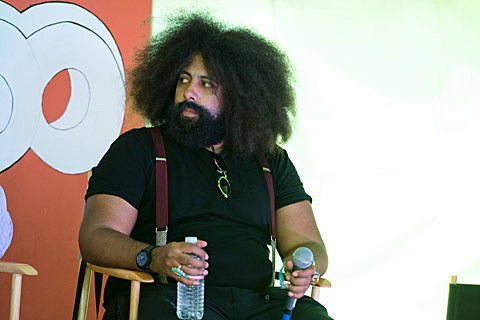 Tickets are still on sale for Reggie Watts' big headlining performance at Town Hall, happening this Wednesday (6/18). Get out there and support the man at one of his biggest live shows yet. Heading to Toronto for NXNE? Reggie will be there too.

Tickets are also still strangely on sale for the David Cross/David Hill thing happening the same night at the Bell House.

Speaking of the Bell House, you can get tickets to the 6/24 live taping of the Tell Your Friends! podcast with Andy Borowitz, Bryan Tucker, Ophira Eisenberg, Andy Blitz, MIchelle Carlo, Bob Powers, Liam McEneaney, and Jessi Klein.

The Bell House is also where Jen Kirkman is doing a night of new material.

Meanwhile, Wyatt Cenac's Night Train shows continue to happen each week in June at Littlefield with Dave Hill, Mike Lawrence and more. AC Newman was a guest this week.

The next edition of The Talk Show Series Presents is set to happen this Thursday (6/19) at Williamsburg's Over the Eight. Bobby Tisdale is the host, with guests Ahna Tessler, Eleanor Friedberger, and more TBA. It's free. Over the Eight is also showing the World Cup, though, so it may be more crowded than usual just from overlap.

Max Silvestri (or someone subbing for him) still hosts The Big Terrific Comedy Show every Wednesday night at Cameo. It's free, and you never know who might pop in. Sometimes Aziz Ansari does a set. Maybe you'll catch him testing out material for his upcoming SHOW AT MADISON SQUARE GARDEN.

Chris Gethard has a bunch of shows coming up, big and small.

Browse our NYC Comedy Show Calendar for much more.