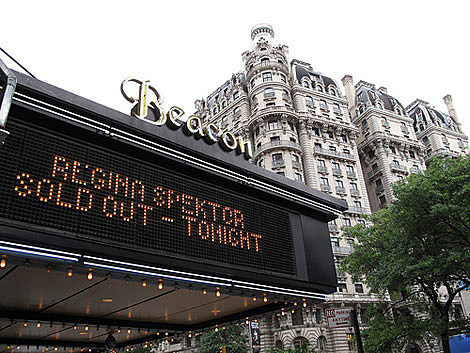 Half an hour into her joyful set at the Beacon Theater [June 17th] Regina Spektor has completely lost her place. She is giggling at first and then laughing and then almost gurgling with pleasure. "Rehearsing at the Beacon theater," she says, "there's so many of you". then she shrugs, "Fuck it," and turns back to arranging the song with her string section. "I'm so happy," she says and she is obviously in a great mood.

Except for two songs on guitar ("I wish I knew more") Spektor sits at her piano throughout the set. She opens with "Folding Chairs" off her new album and continues with another seven new songs till reaching an oldie, a splendid "On The Radio", and it doesn't matter. All the new stuff is maybe her best stuff ever, every song cuts deep with a bouyancy that is like maybe a ball bouncing on the ocean: the undertow pulls her down but she is still light and above it. [Rock NYC Live and Recorded]

That's a write-up of Regina Spektor's recent Beacon Theatre show, which Little Joy opened. The performance was the first of Spektor's dates supporting her latest record, Far, which is out now on Sire Records.

Regina Spektor rounds out July with tour dates in Europe, and currently has a set of North American shows planned for September. Her full schedule is below.

She's also appearing at Barnes & Noble's "Upstairs at the Square" series on Tuesday, August 18th with host Katherine Lanpher and writer Kurt Andersen. The event at the store's Union Square location (33 E 17th St in NYC) will include an interview and a performance. Entrance is free, but admission is first come, first served. Considering the fact that her Beacon show sold out (see above), a sizeable crowd should be expected.

Set list and videos from the Beacon Theatre show, with all tour dates, below...