Regina Spektor at Bowery Ballroom in 2009 (more by Tim Griffin) 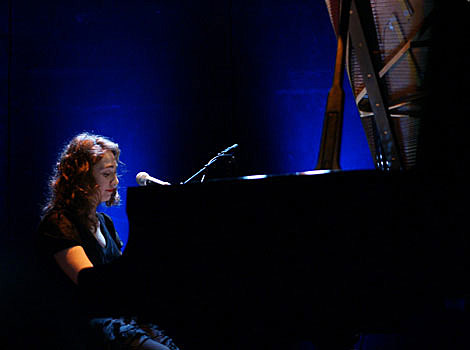 Regina Spektor is playing a show on February 23 at Frederick P. Rose Hall at Lincoln Center, a benefit for the Hebrew Immigrant Aid Society (HIAS). The HIAS "is the international migration agency of the American Jewish community. They provide rescue and refuge around the world for Jews and other refugees escaping violence, repression, and poverty." Tickets, starting at a $55 option and ranging to a $250 option, are on sale now.

Regina has a new album on the way called What We Saw From The Cheap Seats coming out this May. She left this message regarding the album via facebook:

Hi! So! I'm very excited to say that this summer i recorded a new record with Mike Elizondo in LA land! It's been finished for a little while but i had no idea when it would be out in the world until now... We're trying to get everything ready for it to come out in May (but i will share some stuff before then for sure!!!)
It's called---"What We Saw From The Cheap Seats"
big cheers to you all,
regi

Regina is also one of the many guests on Thomas Dolby's 2011 comeback album, A Map of the Floating City, which he recently announced a tour in support of. Stream Regina's contribution to the album, "Evil Twin Brother," below...