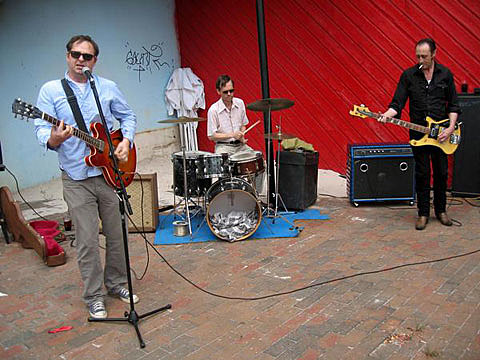 "Why did The Spits beat out Reigning Sound for my favorite album of '09, even though [Reigning Sound's] Love and Curses makes me want to move back to the South and drive around in my grandfather's powder blue Cadillac with the curb feelers and a chain link through the hood so crackheads don't steal the battery? Because I hadn't heard The Spits before this past summer, and I love that thrill of discovery. Also, The Spits are a juggernaut live, while Greg Cartwright spends two hours tuning his guitar in between each two-minute song, killing his band's live momentum." [CT Terry @ Razorcake]

If your album of the year was also between the Spits and Reigning Sound, then June is going to be a good month. We already talked about The Spits' tour with Nobunny, which comes to Knitting Factory Brooklyn on June 11th (tickets are still sale). Reigning Sound is playing shows that month too.

Frontman Greg Cartwright (ex-The Compulsive Gamblers & The Oblivians) and co. have a few scattered dates around the south in April before coming north for the gigs that include a June 19th show at Southpaw with the Anabolics (tickets on sale) and June 20th show at Maxwell's (tickets here). All dates with videos of the band's powerful live show (above tuning comments aside) from some recent-ish gigs, below...

Call Me -The Reigning Sound at the Sivads of March Tribute show.