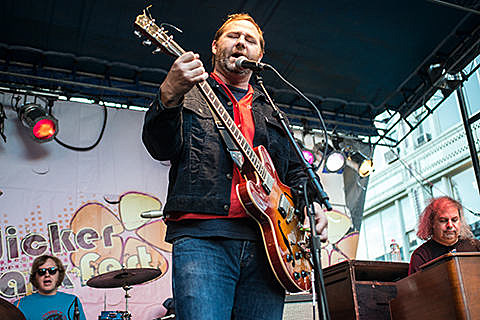 Reigning Sound's new album, Shattered, came out over the summer via Merge and they were just in NYC over Labor Day Weekend. Did you catch them at Bowery Ballroom? If you didn't, or just want to see them again, Reigning Sound will be back in October for CMJ, playing Knitting Factory on 10/22 as part of Panache Booking's showcase that also features White Fence, King Gizzard & The Lizard Wizard, Guy Blakeslee, TVTOR offshoot Ice Balloons, Veronica Falls offshoot Ultimate Painting, and "very special guests." That's a pretty great show. Tickets are on sale now for that. That show is part of an October tour for Reigning Sound, all dates are listed in this post.

White Fence and King Gizzard will be in NYC right before CMJ, too, when their tour hits Baby's All Right on October 13 (tickets).

All Reigning Sound dates are listed, along with the video for single "Never Coming Home," below...