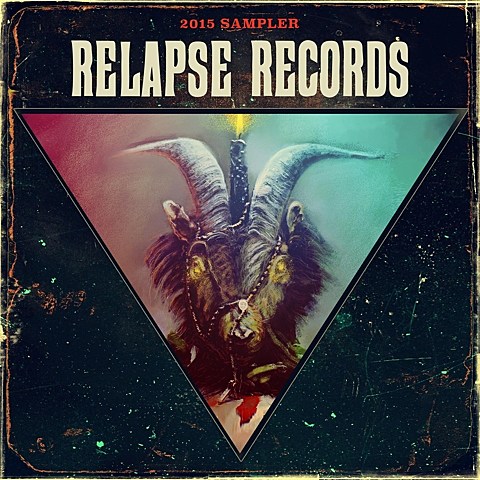 Relapse Records have released their annual sampler, which is available as a name-your-price download at bandcamp. As always, the label offers a diverse slate for metalheads (and rock fans), with popular bands like Torche and Windhand standing alongside truly brutal niche acts like Maruta and Primitive Man, classic rock revivalism in Christian Mistress and Royal Thunder, borderline-metal genre experiments like Pinkish Black and Zombi, and old standbys with some gas left in the tank Goblin Rebirth and Skinless.

These are all records we've talked about, but there are a few great Relapse albums out this year that we haven't highlighted yet. One is the self-titled LP from British band Tau Cross. Tau Cross is the new band of Amebix singer Rob "The Baron" Miller (Amebix ended a four-year reunion in 2012) and it's something of a supergroup, also featuring Jon Misery of Misery, and drummer Michel Langevin of Voivod (who tour soon). The record is really unique in the current metal landscape, a classic-sounding album that reads as legitimately occult and catchy in equal measure. The Baron's grunted vocals are singular as ever, and he lends these simple, riff-driven songs an edge of insanity that they might otherwise lack. They're not the most complex band, but they're scary as hell. Listen to the album below and read an interview with The Baron over at Invisible Oranges.

We've also briefly directed your attention to Valkyrie (which is the other band of Baroness's Pete Adams, and which is playing Terminal 5 on December 29 with Clutch), but let me direct you once again, with a bit more force. Valkyrie's Shadows is one of the best albums of the year, and the kind of fire-breathing, dual-guitar wielding hard rock that scratches such a specific itch for the Thin Lizzy and Deep Purple fans among us. It's not an itch that's scratched enough, making it kind of feel like a momentous album. And don't forget that Baroness, who used to be on Relapse, have a new album and tour on the way, and will be playing NYC on December 20 at Rough Trade (afternoon in-store) and Saint Vitus (sold-out night show).

There's also a new album by Publicist UK, another supergroup that features members of Revocation, Municipal Waste and Melt Banana, among others, and sounds exactly nothing like any of those bands. Instead it's dark, weird post-punk that kind of sounds like Isis covering Killing Joke as fronted by Mark Solotroff. If that sounds like your bag, you know who you are.

And in more recent release news, Finnish doom outfit Hooded Menace, also featured on the sampler, are streaming their new album Darkness Drips Forth, which is a superlative, crushing slab of doom. As monolithic as these things tend to be, this record has some interesting psychedelic flavors and a deep strain of melodocism that serve the otherwise punishingly heavy band well.

You can stream the whole sampler along with the albums by Tau Cross, Valkyrie, Publicist UK and Hooded Menace below...