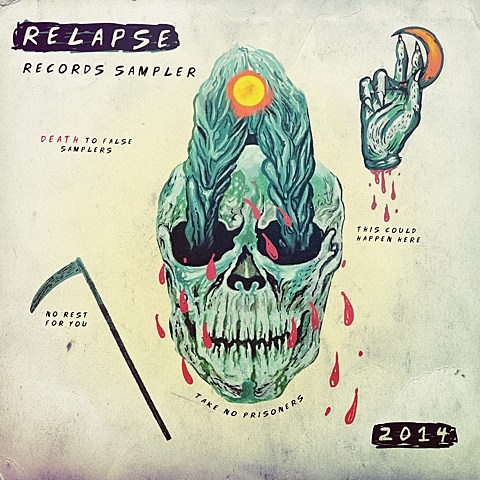 Relapse Records just put out its 26-song 2014 sampler which you can download (name your price) at bandcamp and stream below. It's a good reminder of how diverse their output has been this year, with tracks from indie pop-turned-black metaller Myrkur, shoegazers Nothing, metallic hardcore band Ringworm, math/post rockers Broughton's Rules, pro-wrestler-gone-metaller UltraMantis Black, sludgesters Tombs, death metal legends Obituary, and plenty more. There's also a track from that new Nux Vomica album which has gone overlooked in some places (we haven't had a chance to write about it here) but is one of the most interesting albums I've heard in any genre this year. Check that one out if you haven't already.

Also on the sampler is Publicist UK, a new band whose lineup includes some familiar faces like bassist Brett Bamberger (Revocation, ex-East of the Wall), drummer Dave Witte (Discordance Axis, Melt-Banana, Municipal Waste, etc.), guitarist David Obuchowski (Goes Cube), and vocalist Zachary Lipez (Freshkills). They've got a two-song demo out now which is kind of a heavy take on dark post-punk, and they're recording their debut LP for Relapse very soon. Stay tuned for that, and listen to the demo below.

In other related news, Iron Reagan, whose recent "Miserable Failure" video and recently announced dates we posted HERE, have now released a blooper real from that video. Check that out below too.