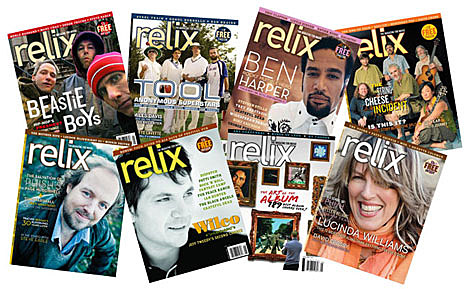 Relix Magazine was launched by Les Kippel in 1974, stemming from the underground network of Grateful Dead concert-goers who taped and traded live recordings. The newsletter was originally distributed under the name Dead Relix and featured hand-drawn black and white concept artwork covers created by artist Gary Kroman. Averaging 20 pages per issue, the articles focused on taping tips and Grateful Dead news.

Even as early as the second issue, non-Dead editorial found its way into Dead Relix's pages and, with the addition of an editor, the young magazine expanded its scope to cover the music of the San Francisco Bay Area psychedelic scene. By 1978, Dead Relix contained reviews, essays, short features and artwork, and had dropped the "Dead" from its title. In a world that was moving away from hippy culture, Relix managed to remain relevant, by expanding its scope of coverage beyond "Bay Area psychedelic rock" to cover genres as diverse as reggae and heavy metal, with varying degrees of success. [Wiki]

To quote an anonymous source, someone "bought RELIX and Jambands.com and saved both from going under." The investor "didn't buy any of the other Zenbu entities though."