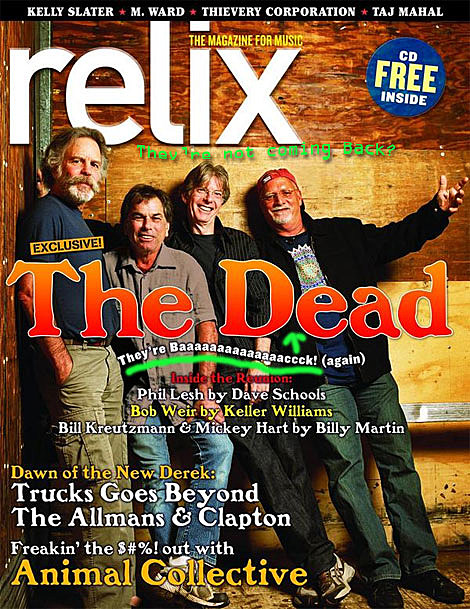 I don't think an official statement has been released, but there were massive (relatively speaking) layoffs at Zenbu Media, home of the jamband-friendly music magazine Relix and, Metal Maniacs and Metal Edge (the magazine titles speak for themselves). Rumors are flying...

An anonymous source has confirmed to MetalSucks that legendary magazines Metal Maniacs and Metal Edge -- both published by Zenbu Media -- have closed their doors for good. At this time we can't report whether either magazine will print any final issues or whether Zenbu itself is in trouble, but we can confirm that the end is nigh for these once mighty metal publications. [Metal Sucks]

Just as The Dead are set to reform and head on the road, the one-time Grateful Dead fanzine [Relix] has officially gone the way of its somewhat peers No Depression and Harp... [Stark Magazine]

The current issue of Relix, slightly modified, is pictured above.

UPDATE 2: sources close to the magazine say that, though they are publishing one more issue of Relix, there is a good chance it will be their last.