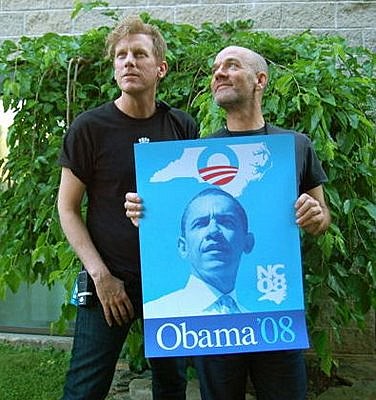 R.E.M., who recently described "why President Obama's vision is essential to the notion of equality and democracy in America", posted the following note today:

R.E.M.'s "Losing My Religion" was used in the Fox News coverage of the Democratic National Convention last night. R.E.M. today, through its music publisher, Warner-Tamerlane Music, demanded that Fox News cease and desist from continuing its unlicensed and unauthorized use of the song. Michael Stipe said, "We have little or no respect for their puff adder brand of reportage. Our music does not belong there."

Of course this type of story is becoming more and more common as the election gets closer. Rage Against the Machine recently had something to say about their fan Paul Ryan, and Thin Lizzy's camp wasn't too happy with Paul either. Same with Twisted Sister, and Silversun Pickups.