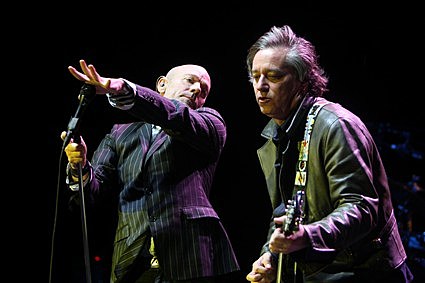 Nikon at Jones Beach Theatre experienced a rain delay at tonight's R.E.M. concert with Modest Mouse and The National. The delay took place as promoters were informed of inclement weather which was reported to approach the venue around 9:00 pm. Modest Mouse had completed their last song when the lightening and rain came into the area.

The venue has always informed patrons to seek shelter in the theatre hallways or go to their cars and listen to local radio stations for information. WBAB, Q104 and WRXP were on the air with up to the minute information regarding the scheduled time for R.E.M.'s performance.

The postponement occurred at an appropriate time as there was a 25 minute intermission already planned for the same time, to change over the stage in preparation for R.E.M.'s performance. The venue did not incur any damage. The performance commenced at 10pm. R.E.M. was a success. [official PR]

Michael Stipe's next NYC appearance is today in a bookstore. R.E.M.'s next NYC show is Thursday @ MSG.

(thx anon for the video)