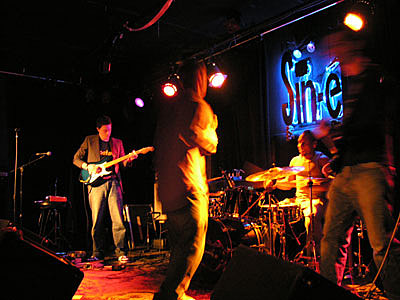 NYC music venue Sin-e existed in three different places before shutting down for good. The most notable location is the original cafe/coffeehouse which was on St. Mark's in the East Village. That's where Jeff Buckley got his start. Buckley's first real release was his 1993 4-song EP entitled "Live at Sin-e" which was expanded into a live double album in 2003, which you can stream in full via RDIO below.

In 2000, slightly ahead of its time, Sin-e relocated to Williamsburg, but that location didn't last long. Back in 2007 the NY Times wrote about it:

"everybody kept telling me go to Williamsburg," in Brooklyn, [owner Shane Doyle] said. "I didn't even know where Williamsburg was." He found the neighborhood and built a 380-capacity club, a giant Sin-é, on an otherwise all-residential block of North Eighth Street near Bedford in 2000. But problems with the city and the community kept it from getting a liquor license and forced him to close after only a few months. [I saw two shows there: Alternative TV and Muckafurgason - Bill.] Mr. Doyle had sold Arlene's Grocery to finance the Brooklyn club; when it failed, he was uncharacteristically down. "I'm walking around, thinking to myself: What the hell am I going to do?" he said. "I have no profession. I have no skill."

Long story short, he went back to Manhattan and opened the next Sin-e at 150 Attorney (corner of Stanton) on the Lower East Side. According to the same NY Times article, Sin-e LES opened in 2001, Bowery Boogie says 2002, but a New York Magazine from 2003 says it opened that year ("the club is run with the discipline of Manhattan workhorses like the Mercury Lounge--there are four or five bands per night, and you can set your watch to the start times").

One thing we're sure about is that Sin-e closed April 2007. BrooklynVegan put together one of the final shows with Pela, Marissa Nadler, Tim Fite and more. Sharon Van Etten used to play there a lot. I saw Walter Schreifels there (and blogged about it). Frightened Rabbit, Yeah Yeah Yeahs, Test Icicles (Dev Hynes included), Ra Ra Riot, The Antlers, The Dresden Dolls (Amanda Palmer included), Man Man, Kayo Dot, Made out of Babies, Ferraby Lionheart, You Say Party We Say Die, Goes Cube, Annuals, Takka Takka, Dawn Landes, The Rakes, We Are Wolves, The Giraffes, Magic Numbers, The Dears, Doveman, Kimya Dawson, Ours, Dean & Britta, Dirty on Purpose, Elefant, and Clap Your Hands Say Yeah all played there. Bill distinctly remembers seeing a great Richard Hawley show there. It's where we caught Chris Glover way before Penguin Prison was a thing. Seeing the Secret Machines there was one of my favorite concerts of 2004, the same year Robyn Hitchcock played a last minute gig there. Other Passengers played one of the final shows there. Their frontman Billy Jones also worked there as a booker before he booked Pianos which was before he became co-owner and music director of Baby's All Right.

ANYWAY, who even knew that over seven years later, the location of Sin-e on the Lower East Side was still sitting empty. Gothamist and Bowery Boogie knew, and now BB points out that "materials submitted to the Department of Buildings suggest that a six-story, mixed-use building is currently planned for the site. The finished product will boast a total of 6,959 square-feet of floor area, most of which is dedicated to five full-floor condos; the remaining 1,375 square-feet is earmarked for retail use (probably three stores).... demolition permits were approved by the DOB back in September. So it's only a matter of time." Rest in Peace again Sin-e!

Stream Jeff Buckley live at (the East Village) Sin-e below. A video of The Diggs playing the LES spot is down there too...