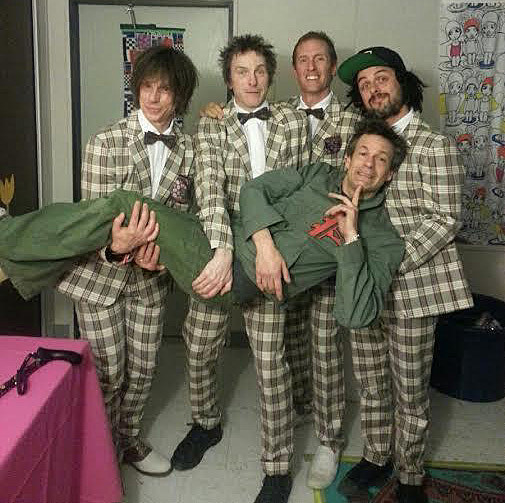 After what was regarded as a lackluster first weekend set, the Replacements returned to Coachella's Outdoor Stage with a vengeance, recruiting Green Day singer Billie Joe Armstrong to fill in for ailing frontman Paul Westerberg, who was laid up on the couch -- literally. [Billboard]

The reunited Replacements now played Riot Fest in multiple cities and Coachella twice including the second week which was this past weekend when they were joined by Billie Joe Armstrong of Green Day (see above).

Their upcoming festival dates continue to get announced and include Shaky Knees in Atlanta, Forecastle in KY, Boston Calling, Osheaga in Montreal, and two weekends of Austin City Limits. They are being picky. The Boston Globe reports that, "Westerberg's manager, Darren Hill, said the band has been invited to play at every major festival, but is only playing a few."

Meanwhile still no NY, but the band today announced their "long-anticipated homecoming show at St. Paul's Midway Stadium on Saturday, September 13, 2014. Tickets for the show, taking place at the home of the Saint Paul Saints, go on sale Saturday, May 3 at 10 AM CDT." Opening acts TBA.

Get well soon Paul!. All dates are listed along with both of their Coachella setlists below....