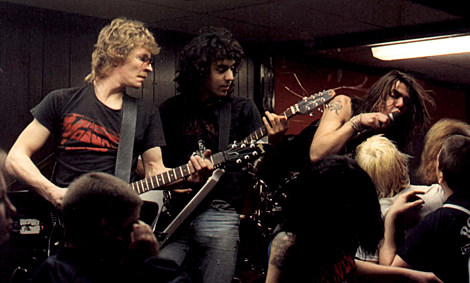 Only four days left (July 31st) until the upcoming NYC debut of grind gods Repulsion along with the unfathomable support crew of Brutal Truth and Pig Destroyer at Brooklyn Masonic Temple. Tickets are still available. 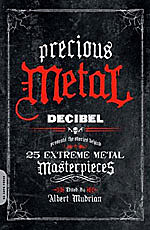 The show will double as a book release party for Decibel's new book Precious Metal, which compiles 25 of their favorite "Hall Of Fame" LPs like Slayer's Reign in Blood, Napalm Death's Scum, Eyehategod's Take as Needed for Pain, Darkthrone's Transilvanian Hunger, Sleep's Jerusalem, The Dillinger Escape Plan's Calculating Infinity as well as the centerpiece for July 31st, Repulsion's Horrifed (Brutal Truth's Need To Control was also a Hall of Fame recipient, but didn't make the book). Decibel will also release a special "Decibill" at the show featuring pieces on all three bands by Decibel greats J. Bennett and Jess Blumensheld (cover of that is below).

In celebration of this momentous show, we asked Kevin Sharp (Brutal Truth), JR Hayes (Pig Destroyer) and Col Jones (Repulsion) to discuss one of the other bands on the bill, what they mean to them and extreme music. Their thoughts are below... a must read!

In addition, we'd be remiss if we didn't (again) mention another major show going down this weekend.... the Show No Mercy/BV-BBG event on Sunday, August 2nd at Public Assembly with Keelhaul, Minsk, Unearthly Trance, Defeatist, and STATS! So to get even MORE celebrate-y up in this mutha, we are happy to announce a MEGA-giveaway for BOTH shows. The prize includes tickets to both shows, records, the Decibel book and more.

Details on that prize and how to win it, the above-mentioned interview, as well as flyers for both shows, and more, below... 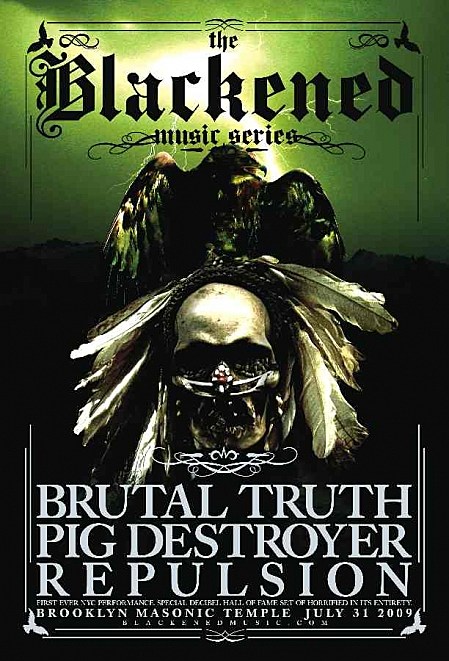 Repulsion was far more important to grindcore than simple inovators... they created a genre through tone. Which is far more complicated or accidental depending on who you talk with. Colin Richardson made an error in the studio and the Discharge sound was created... Dave Lombardo kicked the thrash beat in the ass... Scott Carlson probably stumbled across a pedal in a garage sale... Does not matter - the end result was a sound that is identifiable to the core elements of grindcore. People often make the assumption that grindcore is breakneck speed. And although, the genre evolved into that... the beginning was simple bass evisceration - Godflesh was considered grindcore... I, myself, am coming to complete my tape trading aspirations... the birth of grindcore 101... School is in session... -Kevin

Grind is a genre where it can be really hard to distinguish one band from another, but Brutal Truth have the ability to make their songs ferocious and catchy, which I think is why their records have stood the test of time better than some of their contemporaries'. When Need to Control first came out it totally upped the ante for extreme music. It sounded so violent and so deranged that it made aImost every other band look like a bunch of little girlymen. Over the years they managed to carve out their own unique sound, and I think that's the greatest thing a band can ever achieve. Plus, they've got the immortal Dan Lilker in the band...that dude should have his own wing in the Metal hall of fame. - JR

Admit it, the first time you heard the name you just knew they had to be great, and to no one's surprise they were brilliant. The first time I heard Pig Destroyer the extreme metal landscape was littered with empty cans of white and black make-up, forest goblins, and the tortured screams of Quorthon's evil ghost. Sure, there were the power-violence and Crust crowds that brought the grind and the core but what was sorely missing were the bands that added that little touch of metal that melded the two so brilliantly like Terrorizer, Napalm Death, Repulsion, and now Pig Destroyer. Like true metal warriors, Pig Destroyer ignored the trends and delivered thrash inspired grind opuses like Prowler in the Yard and Terrifyer that not only continued to respect the traditions of the Old Masters but injected touches of modern death metal technicality and noise soundscapes to avoid cliches and bring new life to a vanishing art. Delivering grind free of compromise, Pig Destroyer has quickly distinguished themselves as the leaders of the second generation and is a band worthy of a place amongst the Godz in the pantheon of grindcore. - Col Jones 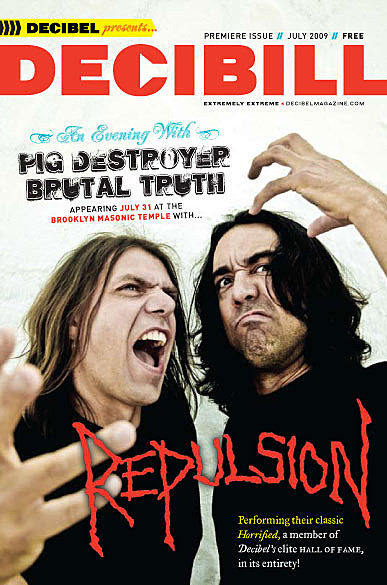 TO WIN OUR MEGA-GIVEAWAY: Email us at BVCONTESTS@HOTMAIL.COM with a subject line of "Show No Blackened Mercy". ONE winner will be selected at random and notified soon. ONE winner will win everything listed below. Include your full name. This is what you will get: