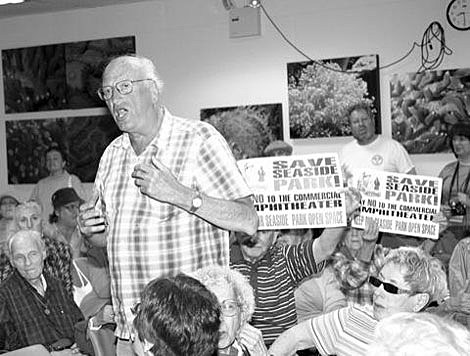 Two competing impressions of the new amphitheater planned for Asser Levy Seaside Park -- one fanciful, the other nightmarish -- collided head-on in Coney Island last week at a contentious and often ugly meeting of Community Board 13's parks committee, held at the New York Aquarium's Education Hall.

The world-famous Cyclone might be located right next door, but it was no match for the thundering roar that residents opposed to the plan produced.

One thing has emerged from the cacophony since: while residents living near the park view the amphitheater as a $64 million millstone tied around the community's neck, Borough Hall views it as the gleaming gateway to a new and reinvigorated Coney Island.

"There is a sea change that is about to happen," Borough Hall spokesperson Laura Sinagra told this newspaper. "Coney Island is going to enter another heyday and this [amphitheater] is going to be a part of that."

Planners are anticipating breaking ground on the new amphitheater by the end of the summer, but profound questions about the project remain...[YourNabe.com, May 28, 2009]

In related news, the Mermaid Parade and the Siren Festival are back this year.