Restorations, Creepoid and The Dirty Nil are currently on a BrooklynVegan-presented tour together, having kicked things off in NYC on Friday (3/25) at Rough Trade. It was a great combination of bands, with each one bringing something distinctly different to the table yet all fitting really well together too.

The Dirty Nil, in town from Canada, kicked things off with the most high-energy set (on stage and off) of the night. They've got a sound that's somewhere between punk and alternative rock, the kind of thing that would've scored a radio hit or two twenty years ago, and they have the rockstar stage presence that would've taken those hits to the next level. Guitarist/vocalist Luke Bentham is smiling the whole time, doing Pete Townshend windmills, jumping and landing in splits, and never missing a note while doing so. Bassist David Nardi takes the mic for a few songs, and gives them a chance to dive into snotty, faster punk. If you'll excuse the Goo Goo Dolls reference, he's kind of the Robby Takac to Bentham's John Rzeznik.

Creepoid, who squeeze NYC shows in fairly frequently, were great as ever. I've become used to seeing them with a more psychedelic light/fog show but even without one on Friday they were just as trippy. They fit into the "punk" side of shoegaze (Nothing, Title Fight, Pity Sex, etc) but of all those bands, Creepoid are the ones who really tap into psychedelia. A lot of those riffs and atmosphere sound straight out of 1960s San Francisco.

Finally wrapping up the night was Restorations. The last two times I saw Restorations, they were opening the show, so it was nice to see them headline. Their sound is super fleshed out, often with three guitars all doing different things at once, and it's tough to pin down too. It's kinda punky heartland rock (singer Jon Loudon's flailing arms on stage always bring Craig Finn to mind), but it's also got an atmospheric post-rock vibe, and sometimes they slow it down to near-Torche levels. We got a good mix from all their albums including highlights off their latest, 2014's LP3.

The tour continues in Toronto on Tuesday (3/29). All remaining dates are listed on the tour poster below, followed by more pictures from the NYC show. 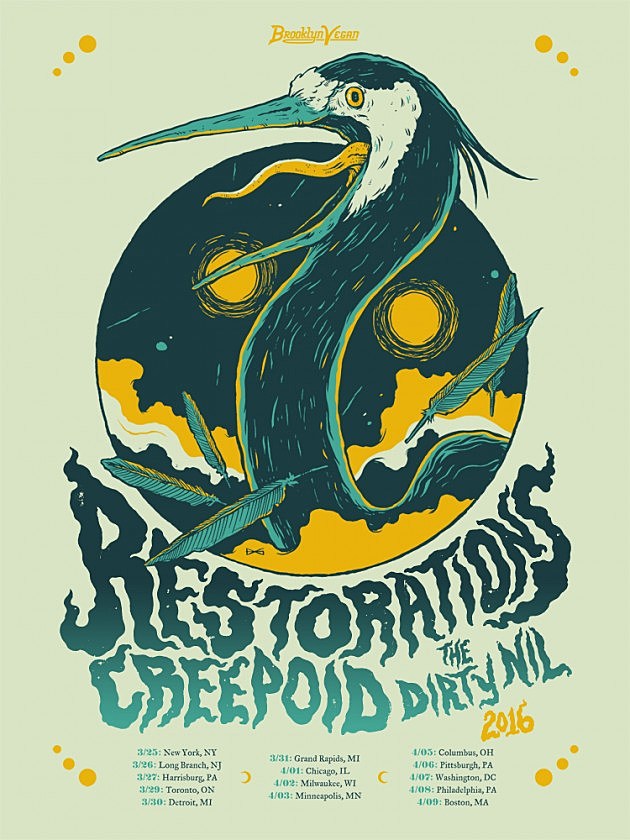