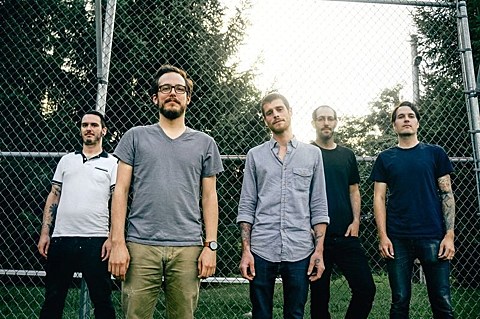 Philly rockers Restorations put out LP3 earlier this year on SideOneDummy. It's an excellent record; one you'll probably see on a handful of year-end lists this year thanks to its superior take on heartland/blue collar rock that rivals a lot of the stuff it was likely influenced by (Lucero, The Hold Steady, Hot Water Music, etc). The band's singer Jon Loudon was also nice enough to give us his own 2014 year-end list, which includes 10 pretty diverse picks.

Check it out for yourself, with commentary on each one from Jon and honorable mentions, below...

Swans - To Be Kind
My favorite album this year by a mile. This is the end result of decades and decades of work on a single idea. I caught them live in London after tour earlier this year and its dominated my musical thinking since. A huge, loose, powerful sound that doesn't feel overly forceful or masculine.

Bry Webb - Free Will
Obviously one of my favorite songwriters. "Let's Get Through Today" is about as good as it gets for me. File under: I would listen to this guy recite a technical manual.

Steve Gunn - Way Out Weather
More spacey/folky guitar music from Philly/NY. This sound doesn't get old to me, no matter how many artists seem to be doing it at the moment. Everybody thats come out of this sub-scene is just on a whole different planet.

Strand of Oaks - Heal
I'm a huge fan of Tim's, and its great to see him branching out here. The record's a little all over the place, but its the sound of somebody having a fucking blast. "Shut In" is my favorite track (and video) this year. Glad to see him finally getting the attention he's deserved for so long. Philly, Philly, Philly.

Nils Frahm - Spaces
I left recording early to go see his show earlier this year (don't tell @sideonedummy). Beautiful modern piano compositions. I listened to this take of "Said and Done" on repeat during our tour of Europe. Drive through Switzerland at 1,000mph while listening to this.

Horseback - Piedmont Apocrypha
The best part of following along with Janks Miller is that you never know what you're going to get with a new release. Doom, neo-folk, noise, classic rock? This is a bit of everything all on one album with a better sense of pacing than normal. One day this hermit will play a show near Philly.

Bob Mould - Beauty & Ruin
I want to be this good this far into my career. Same sentiment as that Swans album - the sound of somebody slowly perfecting their craft. Still kills live, too.

Zammuto - Anchor
Innovative pop music. The Books was one of the most interesting bands I've ever heard, and the first Zammuto record was a fascinating transition out of that. He's letting the vocals lead more this time around, though its his home-made instruments that I love most. Ever see that video where he makes a drum machine out of a vinyl LP? Google that shit.

Sun Kil Moon - Benji
Which was sadder this year? This record, or the turn Mark Kozelek's career has taken with all these PR stunts? I can overlook it if we get more songs like "I Watched The Film The Song Remains The Same".

The Smith Street Band - Throw Me In The River
These people are family to me. Purchase this.

A Winged Victory For The Sullen - Atomos
Take your hammock to Mars.

Tashi Dorji - S/T
Learn how to play guitar all over again.

Yob - Clearing the Path to Ascend
This band finally clicked for me here.

Counting Crows - Somewhere Under Wonderland
A crowd-pleasing record almost to a fault. Glad to have them back.

+ The War On Drugs, Pallbearer, The Austerity Program, Self Defense Family, Pianos Become The Teeth

I am Really Excited for this new Mock Orange record.