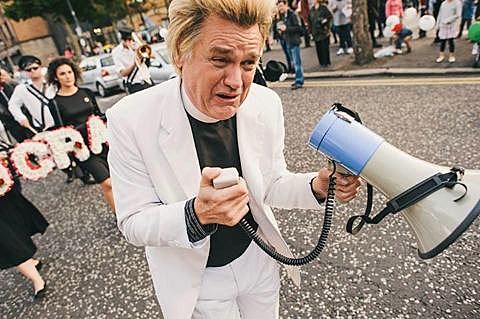 For more than a decade, Reverend Billy, along with his Church of Stop Shopping, has preached fiery sermons against recreational consumerism -- and more recently, against climate disaster. You can often find them greeting the crush of shoppers at Macy's in New York City on Black Friday. That may not be the case this year. That is because in September, Rev. Billy was arrested after staging a 15-minute musical protest at a JPMorgan Chase bank in Manhattan to highlight the bank's environmental record and the extinction of a Central American golden toad. He now faces a year in prison for misdemeanor charges of riot in the second degree, menacing in the third degree, unlawful assembly and two counts of disorderly conduct. - [Democracy Now]

While he faces legal action, Reverend Billy & the Stop Shopping Choir will be performing at Joe's Pub every Sunday through December 22, as well as January 12. (It started last Sunday, 11/24). Tickets are on sale now.

If you're unfamiliar with Rev. Billy's ministry, check out a video below.