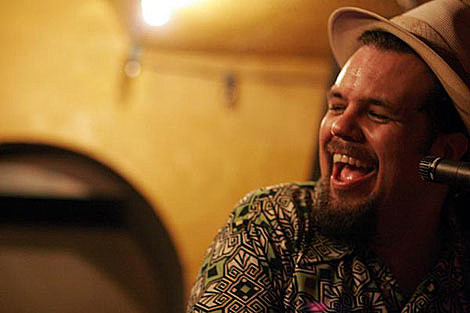 On June 15th, Black Betty regulars Rev. Vince Anderson and his Love Choir played the final show at that Brooklyn venue. Since then, after 4+ years at Black Better, Reverend Vince has moved his act to Brooklyn venue Union Pool for a Monday night residency, which debuted on June 22nd. Admission to the shows is free.

More info on Rev. Vince and his residency, which includes "special weekly guests," below...

Since Anderson is a real minister, the weekly gig serves as both worship service and live performance. Fronting a six-piece band , Reverend Vince Anderson and his mighty Love Choir charge up hipster audiences with two hour long sets of original songs , gospel covers , and what critics tout as a "Bruce Springsteen-style" of impromptu church preaching. Behind his raspy Tom Waits-like voice, Anderson shifts from singing songs that range from psychedelic bluesy groove and drunken New Orleans Brass band to a do-unto-others style of preaching, referring to his music simply as "Dirty Gospel".

Anderson notes, "The title is not meant to offend, it is to remind people that humanity is an important part of the Gospel. Dirty Gospel allows for both the sacred and secular, seeing the line between them as a thin one. It is my hope that all people can relate to our Dirty Gospel regardless of their religious background."

In 2000, the Reverend founded a label using the name Dirty Gospel, releasing 4 albums; 'I need Jesus', 'The 13th Apostle', 'The Blackout Sessions' and the yet to be officially released, '100% JESUS'.

The Reverend Vince Anderson was born on vacation in 1970, at the base of Mount Palomar, CA, at the time the world's largest telescope. He was originally to be named Nathan Robert Anderson, but this quickly changed when Vince Lombardi, the famous Green Bay Packer football coach, suddenly passed. Early in his life, the Andersons moved to the California that no one ever thinks about; A town by the name of Fresno. Famous for its raisins and an ill-fated mini-series starring Carol Burnett, as a boy, he was a member of the Stryper fan club (Stryper being an early 80's Christian hair band). When the Rev. graduated from high school, he left his Christian head banging ways to enroll in the Conservatory of the Pacific, in Stockton, CA. Studying classical piano with a short German man named Wolfgang, it was there that the Rev. received the call of God. After attending services at Glide Memorial Church in San Francisco where the Rev. Cecil Williams had created a neo-hippie church of misfits, drug addicts, prostitutes, artists, and other social outcasts, the Rev. knew he was meant to minister. After a brief stay in Denver, CO, he moved to New York City in 1994 to study at Union Theological Seminary with the intention of becoming a Methodist Minister. The Reverend lasted 3 months in seminary, where upon he felt that God was calling him to minister in bars and taverns. He grabbed his accordion and piano, and promptly started holding weekly "Services" in New York's Lower East Side and in Williamsburg, Brooklyn. After a brief stay with the Universal Life Church, the Reverend soon started his own church; THE CHURCH OF THE HOLY UNRULY SPIRIT OF GOD IN CHRIST. In 2007 the Rev. Vince met Jay Baker, the son of Jim and Tammy Faye Baker. The two became friends, sharing ideas of inclusiveness and being transparent. The Reverend was asked by Jay to be his assistant pastor and was switched his ordination to the Revolution Church.