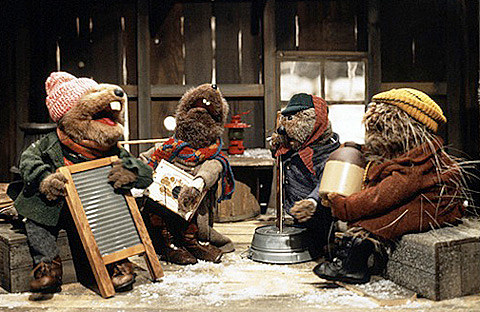 It's that time of year again. You can't seem to walk a block without seeing Christmas lights or hearing holiday favorites (all ten of them) from every passing storefront. If you're looking for something beyond "Baby, It's Cold Outside" for the hundredth time, there's no shortage of holiday-themed shows over the next few weeks. (Though some of them, however, may include that old chestnut.) Here's a few of them:

Sloan Wainwright is bringing the full band version of her intimate project to City Winery on Sunday (12/7) for a special holiday-centric show with the similarly minded Peter Stampfel & The Ether Frolic Mob (who plays new Greenpoint venue Aviv the night before) as well as performances from Cosy Sheridan, Muppeteer Peter Linz, Sam McTavey and more. Tickets for the show are on sale now. You can also catch Sloan at her niece and nephew Rufus and Martha Wainwright's holiday shows at Town Hall later in the month, one of which features, among many many others, Cyndi Lauper who's doing her own guest-filled holiday show.

Like last year, B.B. King Blues Club is hosting a slew of shows dedicated to the holiday celebrations. There's the club's annual Christmas party hosted by Ronnie Spector on December 20 (tickets), and four shows from another Phil Spector protege, Darlene Love, on December 19, 26, 27 and January 2. Tickets for all four shows are still available.

For those celebrating the other major religious holiday during this season, a cappella group The Maccabeats are having their annual Hanukkah show at B.B. King's on December 25 with support from Y-Studs. Tickets are on sale now.

Another option is "Christmas for the Jews" at City Winery. The stand-up show features sets from Avi Liberman, Jon Fisch, Cory Kahaney and more. Sold out.

Meanwhile, Matisyahu plays his annual "Festival of Light" show on December 20 at Best Buy Theater. Tickets for that show are still available.

What else? You can catch Dave Hill, his band Valley Lodge, Todd Barry, Janeane Garofalo, Bridget Everett, Chris DiStefano, Larry Murphy and more at "Meet Me Under The Mistletoe and Tell Me All Your Secrets" on December 10 at The Bell House. Tickets for the show are still available.

As discussed, there's a few other holiday shows at The Bell House including Norah Jones' country band Puss 'N' Boots, The Sweetback Sisters, Eliot & Ilana Glazer, Wasabassco's 70's Christmas Carol and what's sure to be a very magical show presented by Harry & the Potters.

Bridget Everett will also perform at drag king legend Murray Hill's holiday show with Carmine Covelli (who's in Bridget's band The Tender Moments and The Julie Ruin), and burlesque performers Perle Noire, Trixie Little and Mr. Gorgeous on December 13 at Le Poisson Rouge. Tickets for that show are still available.

Also at Union Hall, on December 14 (tix) is a Christmas edition of their monthly "Muppet Vault" series where they'll show classic holiday TV special Emmet Otter's Jug Band Christmas (done here as a singalong) and other appropriate clips from Muppetland.

For a night of music and comedy, there's Aimee Mann & Ted Leo's Christmas tour stop at Town Hall on December 13 with Fred Armisen, The Bangles' Susanna Hoffs and geek-rocker Jonathan Coulton. Tickets for that show are still available.

For a little more traditional Holiday fun there's How The Grinch Stole Christmas! The Musical at The Theater at MSG from December 5 through December 28. (tix).

Speaking of Emmet Otter, check out some great bloopers/outtakes from that Christmas special below...