good times with Dave and Rhett 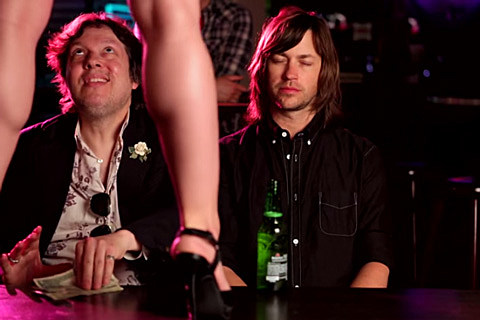 Rhett Miller has released a video for "Most in the Summertime" which is from his new solo album The Traveller. The clip features cameos from Nicole Atkins (who played with him at City Winery earlier this week) and Dave Hill. Watch it below.

Meanhile, his band Old 97's will be on tour this fall, including two nights at NYC's Brooklyn Bowl on October 20 & 21. Tickets for those shows go on sale Friday (6/26) at 10 AM. All dates are listed below.

In other news, Miller recently participated in the AV Club's Hatesong feature, offering up Michael Buble's "It's A Beautiful Day":

I didn't really dislike him personally until a couple of years ago I was in a restaurant and a song came on, and the person with whom I was eating said, "Hey, isn't that you?" And I listened for a second and I felt like, "Oh, yeah..." You know, in a restaurant you can't really hear what's happening. I thought, "Yeah, that's my song. That sounds like 'Perfume.'" Which was the single off the 97's Grand Theatre Vol. 2 in 2011. And as the song went on I realized, wait, there's a pre-chorus section; that's not in the song. And then it hit the chorus, and the chorus was different from my song, but weirdly, the lyrics in the chorus were the lyrics in my song. And so I Shazam-ed it, of course, and I figured out it was the Michael Bublé song called "It's A Beautiful Day."

Find out the rest of the story at at AV Club...