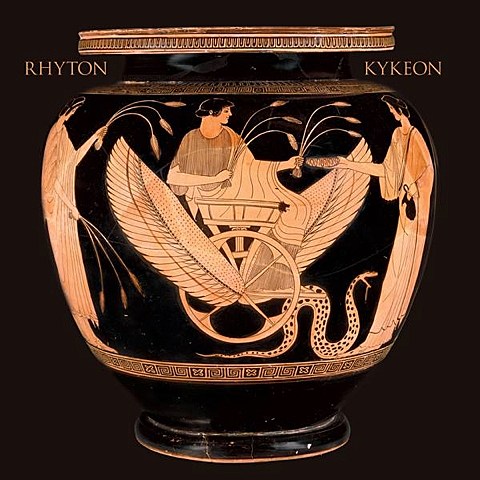 Rhyton returned this week with their newest album, Kykeon, on Thrill Jockey. Made up of three great players in the Brooklyn experimental scene -- David Shuford (aka D. Charles Speer and of No Neck Blues Band), Rob Smith (of Pigeons) and Jimy SeiTang (ex-Psychic Ills) -- Rhyton are well equipped to take on ideas as ambitious as the ones on Kykeon. Of its six songs, four pass the seven-minute mark and only one is under four, and they're all instrumental passages through Middle Eastern melodies and psychedelic rock. In terms of other modern stuff, Grails comes to mind as a comparison, and fans of that band would likely dig this. But really any fans of tripped-out extended jams should check this out. You can listen to the whole thing on Spotify and stream one track below.

At the moment, Rhyton have four shows scheduled including one in Hudson, NY tonight (11/21) and two upcoming dates in their hometown of NYC. The first is this Sunday (11/23) at Trans-Pecos with Fadensonnen (with special guests Chris Pitsiokos, Jim Sauter, Kevin Shea and Brian Sullivan) and Key of Shame (also No Neck-related). Tickets for that show are on sale now.