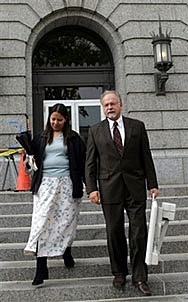 In the first US trial to challenge the illegal downloading of music on the Internet, a single mother from Minnesota was ordered Thursday to pay 220,000 dollars for sharing 24 songs online.
Jammie Thomas, 30, was the first among more than 26,000 people sued by the world's most powerful recording companies to refuse a settlement after being slapped with a lawsuit by the Recording Industry of America and six major music labels.

She turned down an offer to pay a few thousands dollars in fines and instead took the case to court.

Unlike some who insist on the right to share files over the Internet, Thomas says she was wrongfully targeted by SafeNet, a contractor employed by the recording industry to patrol the Internet for copyrighted material.

Her lawyer said earlier this week that she had racked up some 60,000 dollars in legal fees because she refused to be bullied.

And while Thomas insisted on the courthouse steps that she had never downloaded or uploaded music, her lawyer tried to convince jurors there was no way to prove who had uploaded songs on the Kazaa file sharing network.

'She was in tears. She's devastated," Thomas' attorney, Brian Toder, told The Associated Press. "This is a girl that lives from paycheck to paycheck, and now all of a sudden she could get a quarter of her paycheck garnished for the rest of her life."" [globeandmail]

Filed Under: RIAA
Categories: industry, Music News
Comments
Leave A Comment
Back To Top
RELIVE IT: The 2019 Coney Island Mermaid Parade in pics
Here are the 2021 Golden Globes Winners
Ian North of Milk N’ Cookies has died
Watch the trailer for ‘Poly Styrene: I Am A Cliché’
Marc Maron knows who Kevin Morby is now — watch their interview
This Week’s Livestreams (Liz Phair, The Hold Steady, Tigers Jaw, Acid Mothe…
20 New Rap and R&B Songs Out This Week