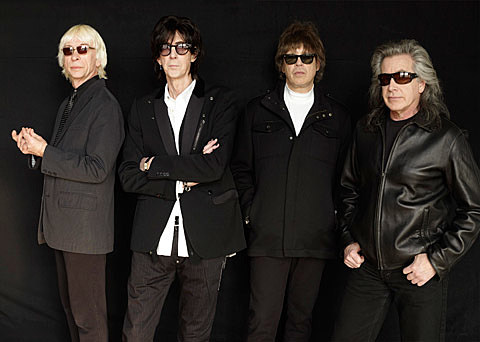 After resisting the idea for many years while "The New Cars" played without him (and with Todd Rundgren in his place), Ric Ocasek has joined back up with his band The Cars, cementing the remainder of the original lineup (except for bassist Benjamin Orr for died of pancreatic cancer in 2000)...

"The project's genesis came in the fall of 2009 as Ocasek considered how to proceed with his latest batch of songs. He realized that his best option was the three players with whom he had the most symbiotic relationship. Ocasek reached out to Hawkes, Easton, and Robinson, each of who were excited at the opportunity to play together again. "It totally clicked immediately," Ocasek says. "Everybody got right into it, as if we had never stopped playing. After two days I thought, 'Oh yeah, this is going to be cool.'"

Even as the band fell naturally back into rhythm, Hawkes says, "We tried hard to keep it from just being a nostalgia thing. We definitely wanted to bring a modern slant to it.""

The new album, their first in 24 years, is called Move Like This, set for release by Hear Music/Concord Music Group on May 10th, 2011 which is also the same day they kick off a tour in Seattle. The NYC show happens May 25th at Roseland. Tickets for that one go on Live Nation presale on Thursday, 4/7, at 10am, and then regular sale on Friday at 11.

All dates and videos videos for the lead singles "Blue Tip" & "Sad Song", below...

The Cars - My Best Friend's Girl