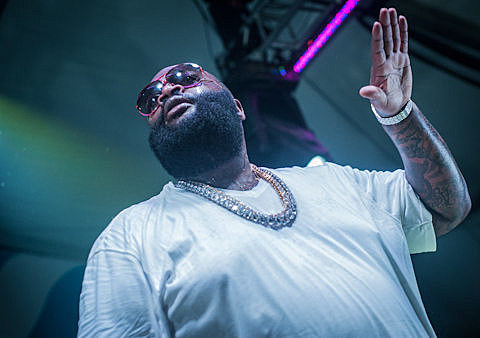 During Saturday's (September 29) taping for BET's 2012 Hip-Hop Awards in Atlanta, Rozay and the Snowman reportedly got into a shoving match backstage before the scuffle spilled outside into the parking lot. Shots were fired and at least one man was said to be arrested.

That's not all. Multiple sources who witnessed the fray confirmed to MTV News that Ross' protégé Gunplay was also involved in fisticuffs with members of 50 Cent's G-Unit camp. Gun was seen with visible wounds and a witness told us that the Miami MC was put into handcuffs and detained, but a separate source close to Gunplay told us that he was not arrested. -[MTV News]

The BET Awards took place at the Atlanta Civic Center where, in front of the cameras, both Rick Ross and Young Jeezy's individual sets went off without a hitch, along with a tribute to the revered Chris Lighty (RIP) that featured A Tribe Called Quest, Missy Elliott, Busta Rhymes, Fat Joe and 50 Cent (the latter two have well documented beef). Check out some video of the Rick Ross/Young Jeezy scuffle (including a broken mirror... bad luck, guys!) courtesy of TMZ below.

In related news, Rick Ross and his Maybach Music associates Wale and Meek Mill have announced a fall tour, and those dates are also listed below...