"Whoever said sarcasm is the lowest form of wit, is a fucking idiot. Not only that, it stops me killing people" - Ricky Gervais last night at NYCF (via @newyorkcomedyfest) 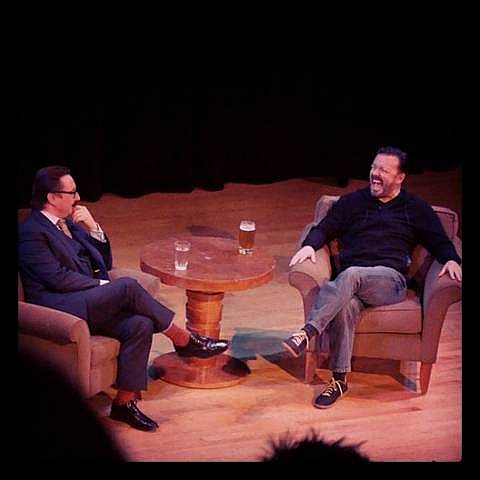 The New York Comedy Festival got underway last night with Ricky Gervais shooting the breeze with John Hodgman at Town Hall. The fest keeps the laughs going all weekend.Tonight's (11/8) big event is the "Stand Up for Heroes" benefit for the Bob Woodruff Foundation at Beacon Theatre with Mike Birbiglia, Ricky Gervais, Patton Oswalt, Bruce Springsteen, Jon Stewart, Robin Williams, John Maher and Roger Waters. Would you be surprised to learn that it's sold out? Well it is, and was also really expensive, but the good news is you can watch it online for free at 8pm EST!

Other shows tonight include Artie Lange at Town Hall, and Shawn and Marlon Wayans at Carolines (and you can still get tickets to those shows).

Other events this weekend include Patton Oswalt at Town Hall and Aziz Ansari at The Apollo on Friday (11/9), not to mention the Ben Stiller Show reunion at the Paley Center; Jim Gaffigan at The Apollo, Rob Delaney at NYU Skirball Center and Kevin Hart at MSG on Saturday (11/10); and Robin Williams in conversation with David Steinberg at 92nd St. Y on Sunday (11/11). There are lots of other shows happening as well, and full schedule and tickets are at the NYCF2012 website.

Also part of the NYCF is Hannibal Buress at Santos on Saturday (11/10) with DJ support from Prince Paul and Mike Lawrence. Tickets are still available. Hannibal is also celebrating the 3rd anniversary of his Sunday night comedy show at Knitting Factory in Brooklyn with a special show this week (11/11) in the main KF performance space (his shows are usually in the bar). Prince Paul will also be DJing this, plus "special guests." While Hannibal's shows there are usually free, this is a ticketed one ("We need the money to buy all of the party soup" - Hannibal). We're guessing it will be well worth it.

Oh, and if you're going to Knitting Factory Sunday, we also have a very good reason you should get there a few hours early.