It's gotta be the shoes (via) 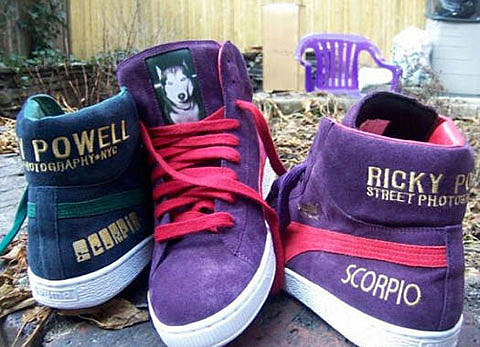 According to Billboard's 10 Reasons Why ATP Rocked:

The audience turned up Sunday afternoon to see Ricky Powell's famous hip-hop photos, but the pics weren't nearly as memorable as the shutterbug's don't-give-a-sh*t dialogue. For two-and-a half hours, Powell -- a fixture of New York rap and art scene -- downed tequila shots while he gave a first-hand account of hip-hop's '80s rise, dished about the celebs "on his d*ck" (Cindy Crawford, Chris Rock), and told outrageous stories about the "freaky bitches" he met during his weed-dealing days. Powell grew more "open" (as he put it) as the event went on, and only ceased his tirade when the mic was forcibly removed from his hand.

Next the acclaimed photographer, famed cable access host, and the "fourth Beastie Boy" Ricky Powell will present a photo slide show at Knitting Factory on 10/2. Tickets are on sale.

Speaking of his cable access show, Ricky Powell recently released the archives of "Rappin' With The Rickster" show for a two DVD set. The first DVD compiles some of his favorite moments from the show, including interviews with Beastie Boys, Russell Simmons, Sofia Coppola, Spike Jonze, Run-D.M.C., Kim Gordon & Thurston Moore (Sonic Youth), in addition to snippets featuring Eazy E, Beck, Q-Tip, Bobbito Garcia, and much more. The second DVD serves as a feature on Ricky Powell in 2010 "and beyond".

Some videos from the "Rappin with The Rickster" show are below....

Beastie Boys - Rappin' with the Rickster