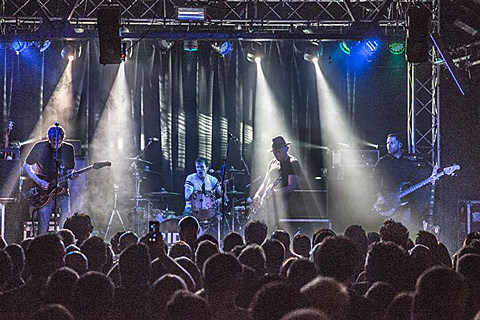 Ride played their first full-band show since announcing their reunion, which happened last night at the O2 Academy in their old hometown of Oxford UK. (Mark Gardener and Andy Bell played an acoustic show in London back in February). The setlist was almost entirely from 1988-1993 heyday, though they did play "Black Nite Crash" from their final album Tarantula which was released after they'd broken up. That was that song's live debut. Setlist, plus video of "Seagull," "OX4," "Dreams Burn Down" and "Drive Blind," below.

Ride will be in North America to play Coachella this weekend and will be in NYC in June for sold-out shows at Terminal 5 with Ash and Music Hall of Williamsburg with Zak Starkey's band Penguinsrising.

Encore:
Leave Them All Behind