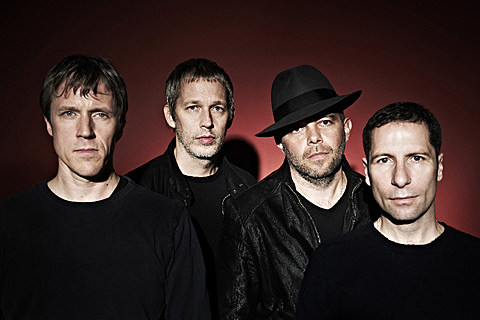 As mentioned, Ride's reunion (all four original members) is in full effect, with 2015 shows at Primavera Sound in Spain, NYC's Terminal 5 on June 4, and more. Tickets for the NYC show are currently on AmEx presale and go on sale to the general public at noon on Friday (11/21).

If this all seemed to happen fast -- Andy Bell's band Beady Eye announced their breakup (which seemed to precipitate things) less than a month ago -- it's actually been in the works for a while. Mark Gardener, who sang lead on songs like "Twisterella," "Kaleidescope" and "Chelsea Girl, sat down with Drowned in Sound for an extensive interview about reforming:

When The Stone Roses got back together I remember thinking maybe we should do it. For a good few years after we split in 1996 I thought that was it for Ride. I pretty much disbanded my entire live rig. I sold a couple of guitars to Andy actually. At that point I was solely concentrating on studio work such as production and mixing. I also love doing soundtrack work which I've gone on to do. But at the same time I've also missed that feeling of playing live. I've missed the guys. We've got on great for years. It feels like completely the right time to do this now. We're really buzzing about it. We want to do it but I also think a lot of people have demanded it in a way too. We are aware of that. Especially in this day and age with social media and stuff. I think you'd have to be living in a hole to not be aware of it!

Gardener also said that Ride's setlist will mainly focus on early EPs and the first two albums, and there are no immediate plans to write new material, but they're not ruling it out.

With Ride's announcement, that makes three '90s-era Creation Records shoegaze bands back in action, with Swervedriver and Slowdive being the others. That would be some triple-bill, huh?

Meanwhile, Ride have put up remastered versions of most of their videos on their YouTube page (including some that haven't been seen in a while). Refamiliarize yourself with them below...