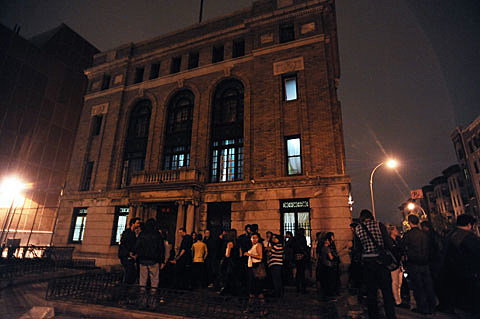 "A local events venue is in trouble with the police after a series of liquor licensing issues, with possibly dire financial consequences for the organization that owns it.

...According to Ridgewood Masonic Temple manager Frank Williams, an organizer for a non-music event in November did not get his permit in time, but threw his event anyhow. The police randomly dropped in on the event and discovered the infraction. Because of this and other previous incidents at RMT, the precinct decided to block the issuance of any more temporary liquor permits for events held there. Patrons are not even allowed to bring their own alcohol. Though the NY State Liquor Authority issues the permits, the local police precinct has jurisdiction to deny one. As a result, Patrick moved the event to 285 Kent Avenue in Williamsburg, where he could legally sell alcohol.

"[Community Affairs] Officer [Damarys] Franco was very understanding," Patrick told BushwickBK, "her feeling is just that they've given [RMT] a lot of chances, and she's going to stop cutting them any slack."...

..Patrick's decision to move the event was social as well as economic. "New Year's Eve is not any fun dry," he said. "If we don't sell alcohol, we can't pay for the place. Unless you're not paying the talent, you're either [charging] $25 a head or you're selling alcohol." $15 tickets for the show sold out shortly after the location was moved. -[BushwickBK]

Deerhoof is is scheduled to play Ridgewood Temple on 2/8, but the BushwickBk article makes it seem like there's not much of a chance we'll be seeing a show at the venue anytime soon (unless someone buys the building, changes the zoning and keeps having shows there). We'll keep you posted if the venue changes. Tickets are still available for advance purchase @ Desert Island Books (540 Metropolitan Ave @ Union Ave | 718.388.5087).

We're not sure what the non-music event that caused the trouble in November was (see above article if you don't know what I mean), but Todd P last succesfully hosted a show at Ridgewood Temple on Halloween.

Oh, and as some commenters pointed out last week, this is not the first time a Todd P show (that Titus Andronicus was playing) that didn't happen at Ridgewood Masonic Temple because of alcohol issues. In 2008 a Titus Andronicus/Black Lips show was moved to Market Hotel last minute. Market Hotel meanwhile still can't host shows anymore either.

Listen to the speech Titus singer Patrick Stickles gave on New Year's Eve (at 285 Kent), below...