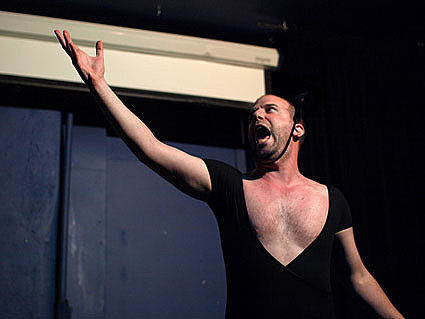 So I just got a myspace bulletin urging me to go to Gelmania at Rififi tonight (July 30, 2008), not only because it has a killer line-up featuring Tom McCaffrey, Baron Vaughn, and Adam Newman, but also because, as the message went on to tell me, the author "Just found out that Rififi is closing, come hang out one last time tonight!". This isn't the first time these words have been uttered. Reluctant to get suckered into this Boy Who Cried Wolf nonsense, I checked out trusted comedy authority The Apiary and sure enough they had a pretty convincing scoop on this most recent closing rumor. The Apiary included a note that Rififi's manager sent to the very funny Matt Ruby:

it's quite possible that thursday will be the last day that rififi will be open, it seems that the owner of rififi has come to an impasse with the landlord... as you might have known rififi has been occupying the space on a month-by-month basis since march and the landlord is now asking for substantially more money, it's possible that he's playing hardball but if an agreement isn't be reached by thursday then it will really be the last day that rififi is open.

i'm sorry we didn't have a couple of weeks to plan for this but the relationship between the landlord and the owner has always been somewhat unstable so it was hard to predict if and when the end would actually come... please be assured that all of the time and effort you put into producing your show has been greatly appreciated, if there is any change in the situation i will let you know as soon as i hear about it.

Rififi currently plays host to incredible weekly shows including Totally J/K, The Greg Johnson and Larry Murphy Show, Sweet Haven, Gelmania, as well as Mo Diggs' Open Mic Comedy Night. The potential loss of such consistently fun and talent-packed showcases will be one of the biggest, most devastating blows to the comedy scene in NYC as I, we, know it.