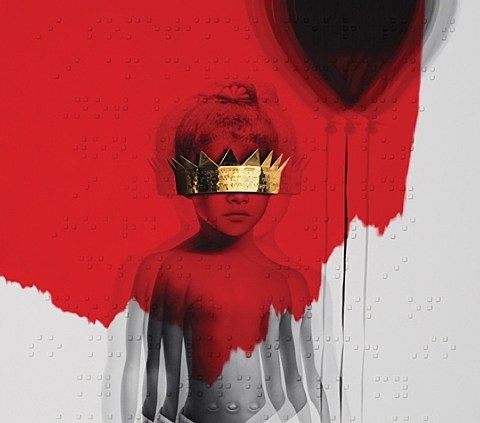 Earlier this week, Rihanna tweeted that she was listening to her much-delayed new album ANTI, implying its release was imminent. Billboard then said it'd be out this week, and earlier tonight a TIDAL user noticed that it was (probably accidentally) uploaded to the streaming service. It was quickly taken down, but not before TIDAL users were able to leak it.

The leak reveals a few interesting things about this record. It doesn't feature any of last year's singles, including the great "Bitch Better Have My Money" (or "FourFiveSeconds" or "American Oxygen"). It does include the Drake collaboration "Work" that came out today (not her first Drake collab, of course) and that explains why she called it ANTI's lead single earlier. Also, unless a really good Rihanna impostor threw this in the leak, it includes a cover of Tame Impala's "New Person, Same Old Mistakes" (retitled "Same Ol' Mistakes"), the last track on last year's Currents. This means RiRi turned down a Grimes song but would've happily taken a Tame Impala song.

The only credited guest aside from Drake is SZA on opening track "Consideration," though The Weeknd, The-Dream and Travi$ Scott all worked on "Woo." Producers include DJ Mustard ("Needed Me"), Timbaland ("Yeah, I Said It"), No I.D. ("Higher"), Boi-1da ("Work"), and more. As reported last year, the album was executive produced by Kanye West (whose own new album has quite the saga surrounding it this week as well). Listen to rips of "Work" and the Tame Impala cover, with the tracklist, below. Update: Streams removed.

UPDATE: Now that it leaked, the album is officially out. You can listen here if you have TIDAL (and otherwise you can hear samples). And that Tame Impala cover is in fact real.

UPDATE 2: It's now a free download for a limited time only, using the code ANTI.

UPDATE 3 (1/28): The deluxe edition is out now with three bonus tracks: "Goodnight Gotham," "Pose," and "Sex With Me." "Goodnight Gotham" is a remix of Florence + the Machine's song "Only If For A Night."

This probably won't be a surprise, but early listens reveal that much of it is in the vein of atmospheric R&B that's dominated both pop and indie for a few years now. And more so than her other recent releases, it feels built to be an "album album," as superstar albums in the post-Yeezus/The 20/20 Experience/BEYONCÉ world often are. (Her last, 2012's Unapologetic, came out before those three did.) It's pretty good stuff to these ears. What do you think?

As previously mentioned, Rihanna is touring with Travi$ Scott in support of the album. It hits NYC on March 27 and 30 at Barclays Center. Tickets for those shows are still available.