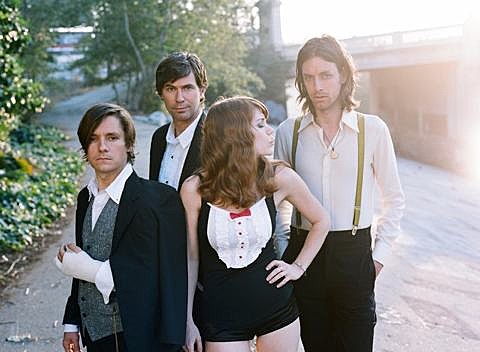 It's been six year's since Rilo Kiley's last album, Under the Blacklight, and the band, who singer Jenny Lewis says "never broke up," are finally coming out of hibernation... for a b-sides and rarities compilation. That record, titled RKives, includes nine never-before-released songs, demos, b-sides, and other loose tracks. The 16 track release, out April 2, will be available on CD and double vinyl with a booklet designed by the band. You can preorder RKives at Rilo Kiley's website.

The band are making a video for the album's first single "Let Me Back In," and they're looking for help:

Help us make our video! For our first single, "Let Me Back In", we invite you to upload your favorite personal Rilo Kiley video clip, band footage, created animation, etc... whatever you have in moving pictures that you'd like to share with us. We will then view and choose among them to incorporate into the video. All submissions are due by March 5th at RiloKiley.com.

You can stream "Let Me In" over at SPIN. In other news, in addition to going on tour as part of The Postal Service this summer, Jenny Lewis also wrote and recorded five new songs for the film Very Good Girls which recently premiered at Sundance and stars Dakota Fanning and Elizabeth Olsen. Lewis also was music supervisor on the film.

I just tend to think in my life you can never shut the door on anything: an ex-lover, a bandmate, a song -- there are so many songs that I didn't want to play for so many years but then they kind of come back around and they become relevant again.