Ringo Deathstarr in Austin in August (more by Tim Griffin) 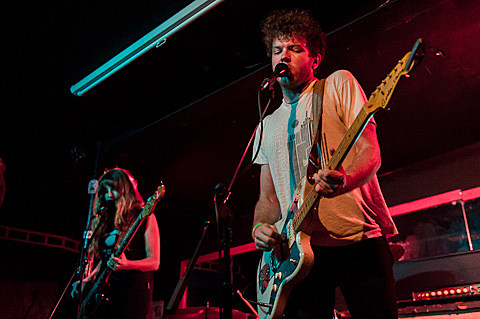 Austin trio Ringo Deathstarr released their new album, Mauve, late last month (9/25), and if you've yet to hear it, you can stream the whole thing below. Also below is the video for the album's lead track, "Rip."

They're on tour now supporting the album, and as discussed they'll come to NYC for shows at Shea Stadium on October 21 and Cake Shop on October 22. Those shows happen right after CMJ, and as predicted, the band have since added a CMJ show which happens on October 20 at Ding Dong Lounge with Dead Leaf Echo, Brief Candles, and Scren Vinyl Image. There may be more CMJ week shows added as the fest gets closer (it's pretty close already).

After their 3-night run in NYC, Ringo Deathstarr will return to the NYC area to play the annual Fall Fest at SUNY Purchase on October 27 with Atlas Sound, Mykki Blanco, Joey Bada$$, Pop. 1290, Leather, Tetsuo, Chit Chat, and Ravi Shavi. That festival is technically only open to students and their guests.

An updated list of Ringo Deathstarr dates, the video and album stream are below.