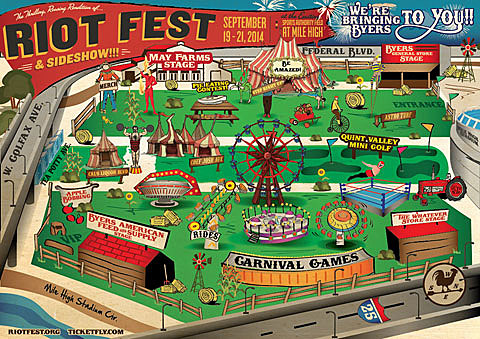 We recently mentioned that Riot Fest Denver's permit to hold the festival at May Farms in Byers, CO was denied due to inconveniences it caused the residents of Byers, and that the fest will happen in a new location. We now know it will be instead held at Sports Authority Field at Mile High in Denver, still from September 19-21 as originally planned. There will also still be free parking for festival goers and all tickets purchased will be honored.

A press release also notes that many of the non-musical perks of May Farms will be kept intact:

Outside of bringing the May Farms aesthetic to the new site, organizers will also go ahead with the previously planned carnival rides and games, a miniature golf course, lucha libre, a large circus tent with oddities performers and a long list of amazing food vendors. Other plans include turfing the parking lot of the stadium and bringing all the things people love about May Farms (tractors, hay bales, etc) together with all the things to love about a country fair (rides, a pie eating contest, apple bobbing and more). Even the stages and vendor rows have been renamed to indicate Riot Fest's support of Byers, Colorado.

Riot Fest is also showing their support of the Byers community:

* Any Byers resident who wants to come to Riot Fest this year will receivecomplimentary tickets as well as free daily shuttle service to and from May Farms and Sports Authority Field. Details will be announced next week on how residents can sign-up for this.

* Riot Fest will also allow several Byers businesses and other I-70 Corridor businesses who supported them free vending space at no cost.

* Riot Fest has also announced a $5,000 scholarship to be awarded to one graduating senior who plans on majoring in music, arts, business or marketing. Riot Fest has now asked other partners, industry friends and other Colorado businesses to contribute in hopes of getting that scholarship up to $20,000.

As discussed, the lineup for Riot Fest Denver includes The Cure, The National, Weezer, Social Distortion, The Flaming Lips, Slayer, Wu-Tang Clan, Failure, Hot Snakes, All, Mineral and many more. Plus certain artists will be performing classic albums in full. Tickets are still available.

Riot Fest also happens in Chicago (which is running a pizza-fied punk album contest) and Toronto.

Day-by-day Riot Fest Denver lineup, with the new flyer, below... 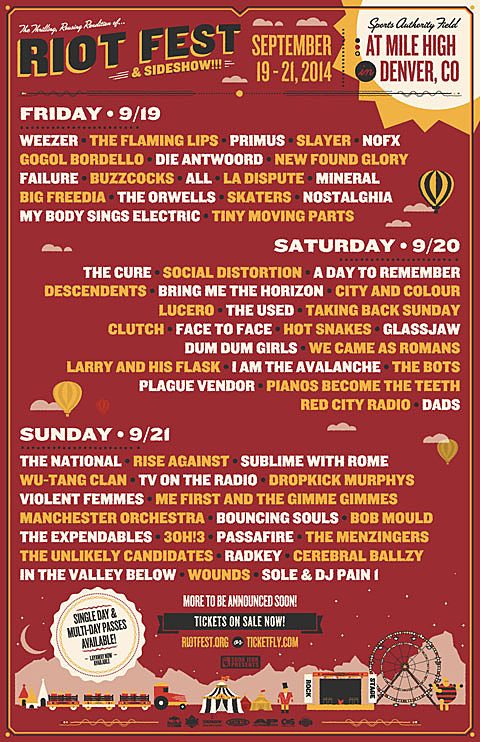 The Cure, Social Distortion, A Day To Remember, Descendents, Bring Me The Horizon, City And Colour, Lucero, The Used, Taking Back Sunday, Clutch, Face To Face, Hot Snakes, Glassjaw, Dum Dum Girls, We Came As Romans, Larry And His Flask, I Am The Avalanche, The Bots, Plague Vendor, Pianos Become The Teeth, Red City Radio, Dads