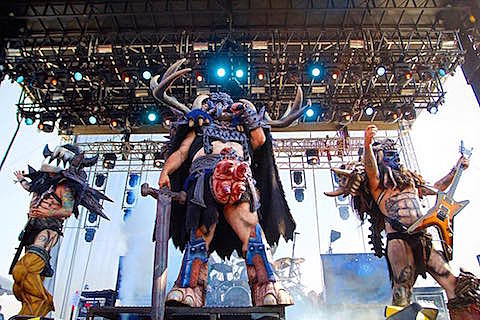 Riot Fest Denver 2015 began on Friday (review, video) and continued Saturday (8/29) with another load of great bands. Actually, they started a few hours earlier this time and had even more great bands, so picking highlights for day 2 was even harder. Run DMC sounded great from what I saw, but I didn't catch enough of them to really write about it. It was nice to see The Damned still doing their thing but given the vibe of the festival I wish they did more fast songs. The heightened crowd reactions for "Anti-Pope" and "Neat Neat Neat" seemed to agree.

Once again, there were so many great sets on Saturday, but here's six highlights:

GWAR: I admit that I'd never seen GWAR before, and it's sad that I didn't get to until after frontman Oderus Urungus died of an overdose in 2014. So I can't compare their Riot Fest set to how it was with Oderus, but I do know they were massively fun. They were as hilarious and shocking as I hoped they'd be. There was of course a beheading, blood sprayed onto the crowd constantly, and the storyline of this one had them bringing out (and killing) "The Internet Troll." It was one of the shorter sets of the day, but totally awesome.

JOYCE MANOR: Most of Riot Fest's highlights have been veteran bands, but Joyce Manor is the kind of band I hope one day returns to Riot Fest as a veteran. They very much come from this same world -- singer Barry Johnson talked about seeing Rancid for his first time as a teenager -- but they truly feel like a modern band. As they usually do, they stacked their set with the majority of their first and third albums and had the whole crowd bouncing around and loving every second. Joyce Manor played the festival's one indoor stage, which was the perfect fit for them. They'd probably be fine on a big outdoor stage too, but taking a break from the sunlight to see these guys up close and personal in the dark was one of the day's best moments.

DESAPARECIDOS: Conor Oberst's having a killer year with the loooong-awaited sophomore album from Desparecidos, easily his best work in a decade. I saw them celebrate the album in New York in a tiny sweaty DIY spot, which felt like the best possible setting for them, but it's no surprise that they have command over a festival crowd too. And at a festival where populist punk bands tend to get the best reactions, Desaparecidos basically have the perfect sound. It's undeniably catchy and cathartic, and it's not quite like any other band on the lineup.

THRICE: Not much has changed about Thrice's set since their great Skate & Surf appearance in May (except we thankfully got "Under A Killing Moon" this time), but it's worth mentioning again how tight these guys are. I don't nerd out over skill level too often, but it's impossible to watch Thrice and not notice how much every member excels at what they do. Whether it's a thrash-inspired song from their early days or a sludgier one from later on, Thrice are heavy as all hell. And it's not like their musicianship is the only draw here. They rock the fuck out and their screaming crowd is an inspiring thing to watch every time.

DRIVE LIKE JEHU: Since they haven't announced a tour yet, one of the big draws of Riot Fest (and a few other festivals this year) was the reunited post-hardcore band Drive Like Jehu. Rick Froberg and John Reis have stayed in active in their many other bands over the years, but these were DLJ's first shows since the mid-'90s and it's great to have them back. Unlike some of their other projects, Drive Like Jehu pay no attention to the structure of a pop song, but here we got to see them zoning out on dissonant jams in a way they don't do so much anymore. Admittedly, they really aren't much of a festival act and I wish they'd bring this tour to small clubs instead of giant outdoor stages. But still a treat to see this band back in action, regardless.

RANCID: Rancid are celebrating the 20th anniversary of ...And Out Come the Wolves this year by playing it in full, and at their Riot Fest set the band ripped through its 19 songs with little to no pause in between. It's not possible for me to be at all unbiased or critical when it comes to ...And Out Come the Wolves. It was a foundational album for me, one that shaped the way I absorbed and thought about and understood punk. I had it in my CD player alarm clock for almost a year straight as a teenager, and even if I don't wake up to "Maxwell can't tell he's in hell!" anymore, it still gets a few spins every year. And at Riot Fest I saw the whole thing come alive. The bass solo in "Maxwell Murder," the raging chorus of "Roots Radicals," the skank-inspiring "Old Friend," the iconic "Ruby Soho." All of it played with exactly the kind of spirit you want out of a great punk rock show. Strangers sang in the faces of other strangers, fists were raised, and almost no one was standing still. Lars Frederiksen took a moment to give a shout out to Motorhead (who had to drop off the fest a day earlier) and dedicate a song to Lemmy. And seeing as they were playing ...And Out Come the Wolves on the night of a supermoon, he asked the crowd to howl at the moon for Lemmy.

After AOCTW they played a four-song encore that included the title track off last year's Honor Is All We Know, their massive hit "Fall Back Down" and two rippers off AOCTW's predecessor, Let's Go: "Tenderloin" and "Radio."

Definitely one of the raddest shows I've seen #joycemanor #riotfest

@thrice_official at @riot_fest in Denver yesterday. Favorite set and photo of the day. I just love them so much 💙 #thrice #dustinkensrue #riotfest #riotfestdenver #denver #colorado