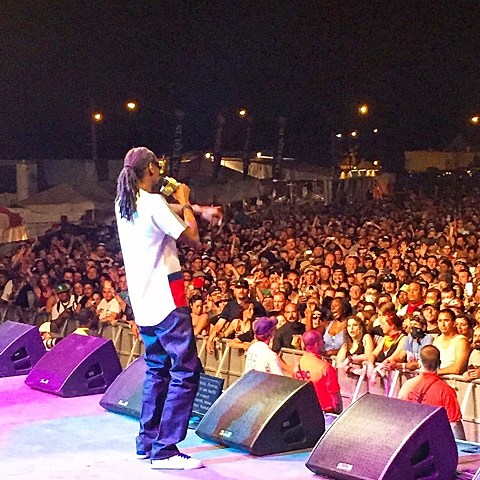 Day 1, Day 2, and then finally Riot Fest Denver 2015 wrapped up with its third and final day on Sunday (8/30). Like the past two days, it was stacked from start to finish with never more than a 15-minute period where there wasn't a good band playing. I only caught partial sets from Explosions in the Sky and The Lawrence Arms due to overlaps with other bands, but what I did see of both sounded great. 7Seconds were terrific (more on them in a second), but after that band into OFF! into Millencolin I was a little burnt out on three-chord punk, so Nada Surf coming on next was a very welcome change of pace. The biggest surprise of the day was how undeniably fun Flogging Molly's set was.

All that and more made Sunday an awesome ending to the festival, but here's the five highlights that stood out most:

7SECONDS: It's an amazing thing how many OG hardcore bands are still going strong, and 7Seconds are no exception. Kevin Seconds, Steve Youth & crew stay true to the mentality they had over three decades ago on "Young 'Til I Die" -- they're loud, fast, and absolutely still young in spirit. Kevin introduced their cover of Sham 69's "If the Kids Are United" by saying "I'm 54 but I'm still a kid... well, sometimes" and even when they played stuff off last year's Leave A Light On they sounded as powerful as their classic era. And we got plenty from that era too. "You Lose," "Not Just Boys Fun," "Here's Your Warning," "Walk Together, Rock Together" and more were played, and they sounded tight as ever. The early crowd who came ready for a 1:45 PM mosh pit would probably agree.

BABES IN TOYLAND: Minneapolis grunge vets Babes In Toyland were one of the reunited bands on Riot Fest this year, and they made a very triumphant return. They're without bassist Maureen Herman, who was just fired mid-tour and they now have a younger bassist who kinda stands off to the side and lets Kat Bjelland and Lori Barbero do their thing, but that didn't hinder their set. Kat and Lori are in killer form in just about every way. As musicians, they're never not pounding away at their instruments, and they can both still scream their heads off. Too many survivors of the early grunge era have lost whatever once made them "alternative," but not Babes In Toyland. Feedback, noise and a genuine punk ferocity were all over this set. Their tour hits NYC in September.

BEACH SLANG: Beach Slang's debut album on Polyvinyl is imminent, and they continue to prove it's one to look out for. We got two songs from it at their Riot Fest set, lead single "Bad Art + Weirdo Ideas" that most of the crowd already knew every word to (it came out less than a month ago) and another that hasn't been released yet. Both were as anthemic and impossibly tight as Beach Slang's slightly older favorites like "Filthy Luck" and "Dirty Cigarettes." Like they did in Brooklyn last month, they included a cover of Jawbreaker's "Bad Scene, Everyone's Fault," which they pull off super well.

L7: Yet another reunited and still-awesome band on this year's lineup was L7. While Babes In Toyland were noisy and confrontational, L7 were rockstars. They cracked jokes between songs (one of which involved bassist Jennifer Finch giving the crowd her actual phone number), yelled "Hit it, Dee!" before "Fast and Frightening," and made rocker poses as much as Anthrax and Testament did on day one. They looked glad to be back, and the crowd was definitely glad to have them too. Fans were roaring in between and during songs, and the whole middle of the crowd was just a sea of pumping fists. They'll also be in NYC on their tour in September.

Oh you know, just #KeithMorris of #OFF! and a few other bands you might have heard of. #CircleJerks #BlackFlag #RiotFestDenver

"The last night of the fair, by the big wheel, genera-tor! "Thank you @riot_fest , for another well planned shindig. You made this rather jaded curmudgeon feel like a kid again . 😉 #riotfest, #denver ,#bestfestivalever

Just outside the #hellzapoppin tent! It was a super rad show! I'm excited to see it grow next year! #riotfest #2015 #fun